Shapes and Fission in Heavy Nuclei

As stated in the recent review by K.Heyde and J.Wood (Review of Modern Physics) “Understanding the occurrence of shape coexistence in atomic nuclei is one of the greatest challenges faced by theories  of nuclear structure. We suggest that a major revolution is underway”. This topic of our research strongly contributes to the statement.

The overarching question addressed by this program is: What are the mechanisms behind the sharp shape evolution (e.g. shape staggering and strong deformation changes) in atomic nuclei?  In particular, we focus on the influence of crossing the neutron mid-shell at N=104 and closed shell at N=126,  and on a search for signs of octupole deformation  inthe charge radii in the vicinity of N=133.

We study  long isotopic chains of the elements of Au-At, both on the neutron-deficient and neutron-rich sides. These exotic nuclei have to be produced at accelerators, are often only available in very small amounts and have in many cases a very short half life. Therefore, very selective methods must be used to extact very scarcely-produced nuclei from the much-more abunantly produced species. In the recent years, we performed successful hyperfine splitting abd isotope shift measurements for the chains of Au, Hg, Tl, Pb, Bi, Po and At isotopes. The unique systematics of charge radii are being produced from these measurements.

The relevant experiments are performed at the mass-separator ISOLDE, see Figure, whereby we employ a range of different detection techniques to identify the nuclei of interest – silicon and germanium detectors for particles decays, MR-ToF mass spectrometer for an additional mass separation and also for ion counting, and a Faraday cup for long-lived/stable isotopes. The laser ionization provides a unique sensitivity for our experiemnts, via the use of the Resonance Ionization Laser Ion Source (RILIS) .

The schematic view (above) of our experiments to study hyperfine splitting (HFS), isomer and isotope shifts and charge radii at ISOLDE. The atoms of the element under study are produced via spallation reactions by 1.5 GeV protons on a thick (50 g/cm2) UC target. After selective ionization by the Resonance Ionization Laser Ion Source (RILIS), the ions are extracted from the source, mass separated and further are counted by one the three methods: Windmill (consisting of Silicon and Ge detectors) – for measurements of nuclear decays; MR-ToF mass spectrometer, and Faraday Cup.

Nuclear fission: a review of experimental advances and phenomenology: Reports on Progress in Physics, 82, 016301 (2017)

A large part of our activities in the heavy nuclei region is dediucated to the fission research, which addresses a multitude of fisson phenomena in several ares of the Chart of Nuclides (see the Figure below), in particular in the neutron-deficient lead region and in the region of heavy  actinides. This section describes our fission research in the lead region, while the actinides region is presented in the next section. 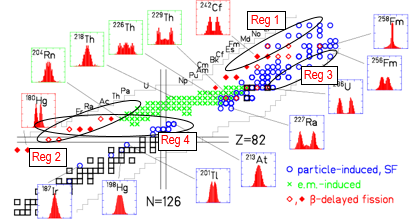 The nuclides for which fission fragment (FF) mass or charge distributions were measured by low-energy fission. Examples of distributions are shown for selected systems (above). Two regions of known βDF nuclei are the heavy actinides (Reg.1, studied at GARIS) and the neutron-deficient lead region (Reg. 2, ISOLDE). At JAEA, we perform MNT-induced fission of minor actinides in Reg. 3  and higher-energy fusion-fission in Reg. 4. The figure is taken from A.N. Andreyev et al, Rev. Mod. Phys. 85, 1541 (2013).

The overarching question addressed by this program is “How do fission properties change in nuclei far away from the well-known uranium region?” Specific experimental and theory questions include:

Our group leads a pioneering and unpalleled research program dedicated to investigation of a very interesting, but very rare and scarcely studied phenomenon  - beta-delayed fission (bDF). The bDF is a procedd in which  a parent (Z,A) nucleus first undergoes a b+/EC decay populating excited states in the daughter (Z-1,A) nucleus, which then may fission with a certain probability, see Figure. Such bDF is of special interest because it allows to study the fission properties (e.g. decay probability, fission barrier height, mass/charge distribution, total kinetic energy, gamma and neutron multiplicities) of very exotic daughter nuclei, possessing a very low (in practice, un-measurable) spontaneous fission branch.

The above figure shows schematic representation of  βDF process.

We perform these experiments at GARIS and at ISOLDE(CERN). The uniqueness of ISOLDE for these studies is that, first of all, a combination of RILIS&ISOLDE provids a very pure beam of studied nuclei, which is very important as the bDF branching ratios are very low, typically in the range of 10-6-10-4. Secondly, we employ a range of detection techniques, a specially developped system, the so-called wind-mill system combined with an efficient and versatile detection setup allowes us to measure all possible decay modes of parent and its daughter products, such as a decay, fission, conversion electrons and gamma rays.

One of the highlights of this program was the measurement of the bDF of 180Tl. In this experiment, a completely unexpected asymmetrical mass distribution of fission fragments from the nucleus 180Hg (the daughter of 180Tl after b+/EC decay) was observed, see Figure. A series of theoretical calculations by different groups elucidated the microscopic origin of this important phenomenon.

A recently-initiated program at the gas-filled separator GARIS(RIKEN) aims at the bDF studies of the very neutron-deficient isotopes of Es, Bk, Am. In our first experiment there, bDF of 230Am was studied in details, establishing it as the isotopes with the highest bDF probability so far (~30%) among all known bDF nuclides. The program will be continued in the next years with  a series of approved experiments at GARIS.

The theory group at York (Prof. J. Dobaczewki and Dr. A. Pastore)  provide  theory support to this research topic. A strong theory collaboration link was established with the fission theory groups in Japan, Los Alamos (US), FRIBs theory group at NSCL (Michigan, US), Poland and others.

Nuclear fission: a review of experimental advances and phenomenology: Reports on Progress in Physics, 82, 016301 (2017)

The next generation of nuclear reactors  - Generation IV reactors are all of the fast-type, meaning that the reactions with fast (unmoderated) neutrons will be exploited, while  most of modern reactors are of the thermal neutrons type. The reactions with fast neutrons will lead to fission from highly-excided states. At present, there is a serious lack of such data and there is an urgent need in the fission/reactor communities to obtain such data, e.g. the fission fragments mass and charge distributions, neutron and gamma ray energy spectra and multiplicities. However, it is not a simple task to get such data experimentally.

In his role of ‘Invited Head’ of the Research Group for Heavy Elements Science at Advanced Science Research Centre (ASRC) at Japan Atomic Energy Agency (JAEA, Tokai, Japan) Andreyev leads an extensive program of fission studies  north-east of 238U. The experiments are performed at the JAEA tandem facility. The unique feature of this tandem is that it has an ECR source, thus it can provide the beams of noble gases.

We use very exotic target materials and multi-nucleon transfer reactions to populate a range of exotic fissioning nuclei, which are not accessible by other technique (e.g. by the fusion-fission reactions). Advantage of this reaction mechanizm is that the data can be simultaneously obtained for several nuclei at a single beam energy by identifying the outgoing ejectiles (thus the transfer channels) in coincidence with the fission fragments.  The fission of nuclei up the excitation energies of several tens MeV can be studied, allowing us to observe excitation energy dependence of fission properties, such as fission fragments mass distributions and neutron multiplicities. The left-hand side of the Figure below  shows the DE-E Silicon array for the ejectile identification. The ejectiles are measured in coincidence with fission fragments, which are detected by four MWPC’s.

In our recent study (R. Leguillon et al, Phys. Lett. B 761, p.125-130 (2016)), the multinucleon-induced fission in the 18O+232Th reaction was studied, the measured fission fragment mass distributions are shown on the right-hand side of the Figure.

The follow-up experiments are aimed on similar measurements with exotic radioactive targets of e.g. 241Am, 249Cf.

The work is performed in a close collaboration with several theory groups across the world – from York, Japan, Los Alamos, Poland an others – which work on the theoretical interpretation of our data.

One of the interesting questions in nuclear structure is how macroscopic phenomena, such as static deformation leading to different shapes or collective behavior such as rotations and vibrations, are related to the underlying microscopic situation of the individual nucleons.

As the even-even nuclei around Z=82 go away from the N=126 shell closure towards the neutron-deficient region and the midshell value of N=104, intruder 0+ states appear at low energy.

Figure. Calculated potential energy surface of 186Pb [A.Andreyev et al., Nature, 405,430 (2000)]. Spherical, oblate and prolate minima are indicated by thick vertical black lines. Calculations are performed on the cartesian mesh. The b2 parameter expresses the elongation of the nucleus along the symmetry axis, while the g parameter relates to the degree of triaxiality in the deformation (that is, the relative lengths of the three principal axes of the spheroidal nucleus). The g parameter is defined such that g=0 corresponds to a prolate (cigar-like) shape and g =60o to an oblate (disk-like) shape.

In our studies we mainly use the following experimental setups, which allow us to perform both particle decay (alpha, beta, gamma and fission) and in-beam experiments.

(Above) General view of the velocity filter SHIP, its target wheel and detection system.

(Above) View of SHIP (cover removed) and of a detection system at the focal plane.

(Above) The GREAT spectrometer is a composite array comprised of various Si and Ge detectors. The heart of the spectrometer is 2 DSSDs (double sided silicon strip detectors) for the implantation of recoiling nuclei and the detection of the their charged particle decay, which is typically alpha-decay or the more rare proton decay. The DSSDs are each 60×40mm with a strip pitch of 1mm giving a total of 4800 1mm2 pixels. The thickness of these detectors is dependent of the decay mode of the nuclei of interest. At present 3 thicknesses are available; 100µm for proton decay studies, 300µm for alpha decay studies and 700µm for beta decay studies. Directly up-stream (with respect to the beam direction) from the DSSDs is a box of PIN diodes. They are 28×28mm in size with a thickness of 500µm and form 2 rings of 14 detectors around the DSSDs. Their purpose is to detect either conversion electrons or escaping alpha particles. Up-stream from the DSSD by ~20cm is a MWPC (multi-wire proportional counter) giving a position and energy loss signal, as well as being the start of a TAC, for which the DSSDs are the stop, hence giving a TOF (time of flight) between the two. Down stream from the DSSDs by only 3mm is a segmented planar germanium detector. It has a 500µm Be entrance window so to minimise the attenuation of X-rays and low energy gamma rays. It is 12cm wide, 6cm high, 1.5cm thick and has a strip pitch of 0.5cm. Directly above the GREAT chamber is a segment Clover Ge detector used for the detection of higher energy gamma rays.