Proteins from frozen canine faeces have been successfully extracted for the first time to reveal more about the diets of Arctic sled dogs. 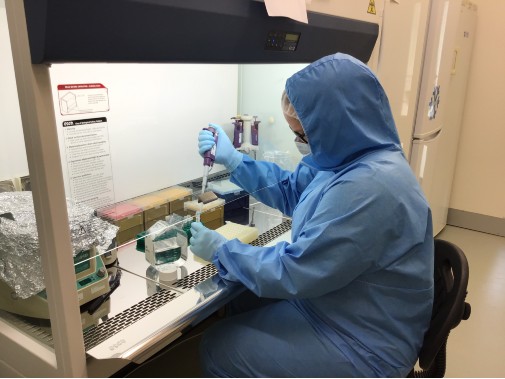 Researchers - led by the University of York -  say the breakthrough will enable scientists to use palaeofaeces (ancient faeces), to reveal more about our ancestors and their animals.

The recovered proteins revealed that sled dogs at the Nunalleq archaeological site, near Quinhagak, Alaska consumed muscle, bone and intestines from a range of salmon species including chum salmon, often called,  “dog salmon.”

Proteins deriving from the dogs that deposited the samples were also detected. The majority of these were associated with the digestive system and confirmed that the samples passed through the gastrointestinal tract. However, a bone fragment found in one of the samples was identified as being from a canid, suggesting that the dogs also ate other dogs, which is supported by previous observations of gnaw marks on discarded bones.

Lead researcher, PhD student Anne Kathrine Wiborg Runge from the Department of Archaeology said that the study demonstrated the viability of frozen palaeofaeces as a unique source of information.

She said: “The lives of dogs and their interactions with humans have only recently become a subject of interest to archaeologists. This study of their dietary habits reveals more about their relationship with humans.

“In the Arctic, dogs rely exclusively on humans for food during the winter but deciphering the details of provisioning strategies has been challenging.

“In places like the Arctic the permafrost has preserved palaeofaeces. Now they can be used as a unique source of information by which we can learn more about the past.”

The researchers used palaeoproteomics, a technique based on tandem mass spectrometry (LC-MS/MS) to recover proteins from the faecal samples. Unlike more established or  traditional analyses, proteomics can provide insight into which tissues the proteins originated from and makes it possible to identify which parts of animals were consumed.

Complementary analyses were performed with Zooarchaeology by Mass Spectrometry (ZooMS), an analytical approach pioneered at the University of York, on bone fragments recovered from within the palaeofaeces. This technique uses the collagen protein preserved in archaeological and historic artefacts to identify the species from which it derives.

“Arctic dogs rely exclusively on humans for food during the long winters, but may have been fed differently or less frequently in summer, or been let loose to fend  for themselves. Working sled dogs are a particularly expensive resource, requiring up to 3.2 kg of fish or meat every day and provisioning of dogs would therefore have played a significant role in the food procurement strategies of past arctic cultures,” added Anne Kathrine Wiborg Runge.

The paper called,  “Palaeoproteomic analyses of dog palaeofaeces reveal a preserved dietary and host digestive proteome,” is published in Proceedings of the Royal Society B.