Sophie is a PhD researcher interested in reconstructing palaeoclimates and palaeoenvironments, specifically those within the Quaternary period, using sedimentary archives and recent dating methodologies. Before starting her PhD in 2017, Sophie undertook a MSc at the University of Bristol in Palaeobiology, and a BSc in Physical Geography at the University of Leeds.

Sophie is also actively involved in public engagement and outreach, and has lead several conferences including the Quaternary Research Association 2019 Postgraduate Conference. Sophie also has written for the Past Global Changes (PAGES) magazine and in January 2020 she joined the editorial board of the journal Lithosphere re-launched by GeoScienceWorld.

To read more about Sophie and her work you can visit her personal website: https://sophielaurenwilliams.wordpress.com or visit her twitter @sophielwill_

This project will seek to reconstruct sea level in southeast Australia over the last ca. 500 years to test the Arctic Ice Melt Hypothesis: the theory that before anthropogenic influence, melting from the Greenland ice sheet and Arctic glaciers was responsible for a rapid rise in sea level during the 19th and 20th century that departed from the Holocene trend. Because melting ice causes gravitational perturbations, each melting event leaves behind specific sea-level "fingerprints" which can be tracked across space and time. The gravitational changes result in a non-uniform distribution of sea-level with large relative sea-level drops closest to the melt source and sea-level rise thousands of kilometres away in the mid-latitudes. Therefore, Australia is an ideal location in which to observe this change.

The main aims of the project are to: 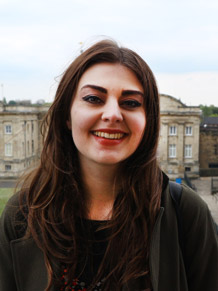