Visit Bryce Stewart's profile on the York Research Database to:

Bryce is a marine ecologist and fisheries biologist whose work has ranged from temperate estuaries to tropical coral reefs and the deep-sea. The central thread in his research has been to gain an increased understanding of the factors regulating marine populations and communities so as to ensure their sustainable utilisation. His work on deep-sea fishes was among the first to demonstrate their extreme longevity, and on coral reefs he provided new evidence for mechanisms of community regulation of prey fish by predators. More recently his focus has been on how to improve the management of fisheries through the use of predictive recruitment models, marine protected areas and stock enhancement. Bryce also actively promotes sustainability within the seafood industry by working with everyone from government ministers to fishermen, restaurants and supermarket chains. Since 2016 he has been particularly involved with assessing the effects of Brexit on UK fisheries and the marine environment, and helping to plan for future reform of management by working with a wide range of stakeholders and the Government.

Director for Engagement and Partnerships

Co-leader of the Archaeology, Biology, Chemistry and Environment Programme - School of Natural Sciences

Management of Marine Fisheries and Ecosystems

For over 20 years Bryce has been conducting research on the biology, impacts and management of marine fisheries. A particular focus has been on examining the utility of Marine Protected Areas (MPAs) for providing breeding refuges for scallops and mitigating the environmental effects of scallop fishing gear. This work has had considerable influence on fisheries management policies in the United Kingdom. More recently his interest in fisheries management has been expanded to examine the use of MPAs for other species, and how to reduce discards and by-catch in finfish fisheries. Since 2016 he has also been heavily involved in assessing the effects of Brexit on the management of fisheries and the marine environment around the UK.

The Effects of Environmental Change on Aquatic Ecosystems

Recent research has revealed that scallop populations are currently being benefited by climate change. However, effects further into the future and on the benthic community in general are likely to be more complicated. Bryce is currently examining long-term datasets in collaboration with his research students to explore these concepts. An interesting angle to consider in the future will be the effect of ocean acidification on marine invertebrate communities.

The Effectiveness of the Sustainable Seafood Movement

During his time at the Marine Conservation Society and also as a private consultant, Bryce became extensively involved in the promotion and assessment of “sustainable” seafood. He is now involved in examining awareness of sustainable seafood among consumers, retailers and chefs. He is also exploring evidence for the effects of the sustainable seafood movement on the management of fisheries.

Conservation in Action, Department of Environment and Geography, University of York 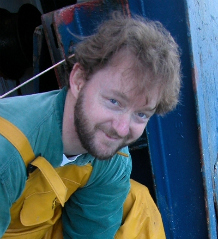 Stewart BD and Howarth LM (2014) Can we have our fish and eat it? Invited seminar. Community of Arran Seabed Trust, July 2014, Lamlash, Scotland, UK.

Stewart BD (2014) Can we have our fish and eat it? Invited seminar. Scottish Association of Marine Sciences, July 2014, Oban, Scotland, UK.

Beukers-Stewart BD (2012) Can we have our fish and eat it?Invited seminar, University of Newcastle, March 2012, Newcastle upon Tyne, UK.

Beukers-Stewart BD (2011) Can we have our fish and eat it? Keynote speaker. Conservation Forum: Annual Conference of the Lincolnshire Wildlife Trust. November 2011, Horncastle, UK.

Beukers-Stewart BD (2006). Can we have our fish and eat it? Invited seminar, Defra, Marine and Fisheries Division, June 2006, London, UK.

The Metro: "Celebrity chefs fail food test, but what about the rest of us?" November 2013

The Telegraph: "Delia and Nigella panned over endangered fish" October 2013

The Times: "Celebrity chefs given a dressing down for choosing wrong fish" October 2013

Futurity: "Lack of biodiversity could topple fisheries" May 2013