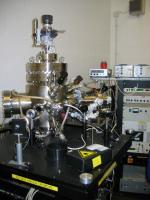 Iron, nickel and other ferromagnetic materials can change shape when placed between the poles of a strong magnet; this is called magnetostriction. Magnetostriction is maximal when a material is fully magnetised and is quoted as a strain. The changes in shape can be relatively large if the material is a single crystal, in which all the atoms are aligned. The spaces between the atoms have electrons associated with them that are responsible for the materials magnetic properties. Each electron can be thought of as magnet which can be aligned by a strong external magnetic field so that the material becomes magnetised in one particular direction. Because of several factors (including the crystal shape), the ‘magnetic’ electrons can be aligned more easily in some directions than in others. This is called magnetic anisotropy.

The ‘magnetic’ electrons move in a new average direction during magnetisation and ‘pull’ their associated atoms with them. This changes the distance between adjacent atoms, giving rise to an overall change in shape. The process is called Joule magnetostriction, or the Villari effect. Interestingly, it is possible to stretch, or compress, a magnetic material in order to change the direction of its magnetisation (the average direction of the ‘magnetic’ electrons). This is called the inverse Joule, or Villari effect.

We grow magnetic films, several atoms thick, and strain them. Polarised laser light is used to observe what happens to the direction of magnetisation during straining. The plane of polarisation, of the light, rotates as the magnetic film is magnetised by an external magnetic field. This is called the Kerr effect and is proportional to the magnetisation of the film. We find that the direction of preferred magnetisation does indeed change with applied strain and we explore how this differs between films of different thickness. We have observed that when the films are only several atoms thick they have very different magnetoelastic properties than thicker films. The applications for this research include micro-machines, better materials for spin transport, strain gauges, accelerometers and many more.

Tohoku University in Japan, the University of York in the UK, and Technical University of Kaiserslautern in Germany are collaborating in a Core-to-Core Programme organised by the Japan Society for the Promotion of Science.

Our four key aims are to investigate a spin transistor with an optical gate, an all Heusler alloy MRAM cell, spin-transfer torque induced by the spin See-beck effect, and design a prototype logic circuit.