Physical properties of electron spins have intensively been investigated because of the potential spintronic applications, such as a spin operator as a replacement for the currently used electronic transistor (see Fig. 1). In a spin operator with using a non-local method, it is very important to note that a conventional electron charge current does not flow into a non-magnetic media for the operation, while a spin current travels into the non-magnet. This clearly suggests that the device can circumvent conventional obstacles in electronic circuits, such as the Joule heating, and hence can reduce the power consumption as compared with present transistors. The spin operator is therefore different from the previously proposed spin-polarized field effect transistor (spin FET), which utilises a spin-polarised charge current [1]. A spin operator holds great potential to perform both data storage and processing in the same lateral circuit, which can be integrated in very high density. In order to realise such a device, three fundamental aspects of spin transport are required to be established; efficient spin-current injection from the ferromagnet into the non-magnet, spin operation (and amplification) in the non-magnetic media, and output from the media.

A nano-scale spin operator will be fabricated as a future spintronic device. Such a device may become a template to precisely characterize the fundamental physical properties of the spin current; spin diffusion length of the non-magnet and coherent size of the spin current, and propagation mechanism of the spin current, for instance. This research requires knowledge on both physics and materials science and provides great impact on the spintronic community.

Further information can be found here

For the realisation of highly efficient spin-current input, two different approaches have been proposed theoretically; spin injection from the ferromagnet with nearly 100% spin polarisation in a diffusive regime [1], and insertion of a tunnel barrier into the ferromagnet/non-magnet interface to utilise ballistic electrons [2]. For the former approach, in particular, the requirement can be achieved by using either dilute magnetic semiconductors [3] or half-metallic ferromagnets [4]. The half-metal possesses a band gap at the Fermi level EF only for minority spins, achieving 100% spin polarisation at the EF with showing a considerable magnitude of a magnetic moment. To date there has been no experimental report on the half-metallicity at room temperature, and Heusler alloys theoretically hold the greatest potential to realise the half-metallicity at room temperature due to the high Curie temperature and the large band gap at the EF in general.

By employing either Co-based full-Heusler alloy films [5] or ferromagnetic oxide layers, spin-filtering effect will be achieved at room temperature as the first step. Both films will be epitaxially grown by using MBE in an ultrahigh vacuum. By satisfying the stoichiometry and the perfectly ordered structures at the interfaces, these films are expected to show the spin-filtering effect at the EF as illustrated in Fig. 1.

Since this effect occurs in the vicinity of the EF, one can anticipate higher applicability than the giant tunneling magnetoresistance observed with an oriented MgO(001) barrier [6]. Accordingly, the spin-filtering films can become an ideal spin source for the spin operator with realising large spin transfer and accumulation as compared with the conventional transition ferromagnet used at present. 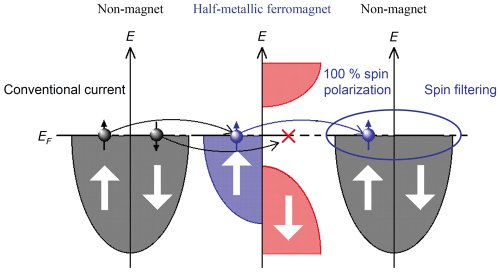 Fig. 1: Spin-filtering effect induced by the insertion of a half-metallic ferromagnet.