Many problems in plasma physics can only be solved with the aid of computers. Here at the YPI, we develop and use advanced computational techniques and software that is run on some of the most powerful supercomputers in the world, in order to solve some of these otherwise intractable problems.

Here in the YPI we both use and develop some of the world-leading plasma codes, including GS2, BOUT++, and EPOCH. These codes are used to run simulations on some of the most powerful supercomputers in the world.

Computational plasma physics covers all three of the strands within the YPI: magnetic confinement fusion, laser plasmas and low-temperature plasmas. We have research projects that are more focused on developing the capabilities of the codes, as well as projects that use existing codes in novel applications. 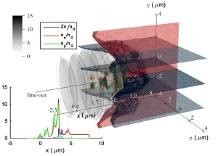