Primates who are more tolerant of each other use vocal communication more than their stricter counterparts, research from the University of York shows. 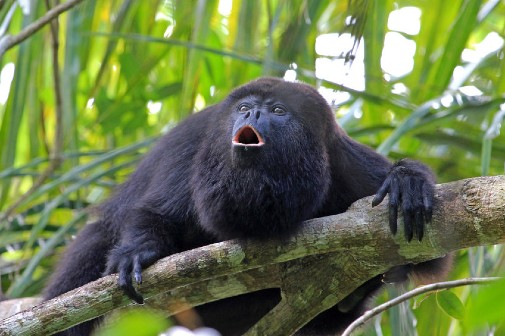 Black howler monkeys are an example of a tolerant species, the study shows

The study looked at how dominant primates behave towards those of lower status, with some demanding deference and punishing challenges from subordinates harshly (despotic), whilst others are more relaxed (tolerant).

Researchers say this characteristic called “dominance style” is an important factor in understanding the evolution of communication. They expected that tolerant primates would use more communication than despotic primates to achieve their goals or to maintain their dominant position, instead of using aggression.

Using behavioural data from 26 primate species, the researchers quantified dominance style for the first time in many of these species.

Lead author, Dr Eithne Kavanagh a former PhD student from the Department of Psychology said: “We found evidence that dominance style was related to vocal communication at both individual and species levels.

“Notably, we found that more despotic species had richer repertoires of hierarchy-related calls in their evolved vocal systems, but that individuals who were more tolerant of lower-ranking partners vocalized at a higher rate.

“This indicates that tolerance within a relationship may place pressure on the dominant partner to communicate more during social interactions.”

The study concluded that overall, the findings suggested that the strictness of the dominance relationships of individuals and species provides important context for understanding primate vocal usage and evolution.

Partners in the research included Professor Katie Slocombe from the University of York, Dr Adriano Lameira from University of Warwick and Dr Sally Street from Durham University. This project was only possible with a great collaborative effort, with  64 primate researchers from 59 institutions working together to build the data set necessary to test these ideas.

The paper called, “Dominance style is a key predictor of vocal use and evolution across non-human Primates,” is published in Royal Society Open Science.