A new college at the University of York will be named after scholar and Yorkshire businesswoman, Anne Lister. 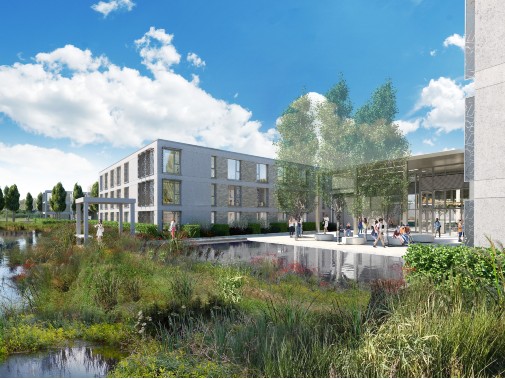 Artist's impression of the new college which will include 348 rooms. Pic Credit: Sheppard Robson Architects

The college is one of two currently being built on the University’s Campus East and will open to students in September.

It will include 348 rooms, shared communal areas, an open plan study space and gardens.

Born in 1791, Anne Lister - often described as the first modern lesbian - was a prolific diarist whose life story was told in the recent TV series Gentleman Jack, written and directed by York alumna, Sally Wainwright OBE.

Her diaries contained her thoughts on a variety of topics, from her sexuality, to detailed information on social, political, and economic events of the time, and are considered a major scholarly achievement.

A copy of her will is housed in the University’s Borthwick Institute for Archives.

Anne’s name was chosen for the college from a list of notable people with connections to the University or to the city of York which were put forward by students and staff and then confirmed by the University Executive Board. Anne was educated in York at the Manor School, which is now King's Manor and part of the University of York.

Vice-Chancellor, Professor Charlie Jeffery said: “Colleges are an integral part of University life here at York and we look forward to welcoming students to the new facilities soon.

"Naming our 10th college after Anne Lister, whose dedication to scholarship and a determination to pursue her life as she saw fit at a time when women had few rights and many obstacles to equality of opportunity, reflects our values and our commitment to equality, diversity and inclusion.”

“Anne had strong connections to York, including attending Manor House School which is now part of our city centre campus. The University board was unanimous in its agreement that the name that was put forward by students and staff was the right choice.”

The Anne Lister Society was launched in 2020, in the wake of the Gentleman Jack series.

Describing the Society’s dedication to fostering research and conversation, Professor Laurie Shannon, at Northwestern University in the U.S, said: “We aim to establish Anne Lister’s due place in the historical and literary record — and to interpret her life and writing as a rousing new legacy for the future.”

Screenwriter and director Sally Wainwright said: “I am beyond delighted with this wonderful news. Professor Laurie Shannon and I, and all our colleagues in the Anne Lister Society, proposed Anne Lister because she had such deep connections with York and had a passionate commitment to the pursuit of knowledge all her life.

“This is a very appropriate honour for a remarkable Yorkshire woman. I hope Anne Lister’s intellectual courage will inspire all who come to study at York.”

The first rooms in Anne Lister College will be occupied by students in September 2021. The second new college is due to be completed by September 2022 and is yet to be named.