Places of Interest in and around York

From London the journey time is about two hours; Edinburgh is only two and a half hours from York and there are direct services from Liverpool, Manchester, Birmingham and the South West.

The Station is about 12 minutes walk from the King's Manor, alternatively you will be able to pick up a taxi from there. The station is apx. a 30-40 minute walk to the main campus, or a shorter bus or taxi ride that can be picked up from the station.

You can obtain further details about rail travel from the following websites:

The closest airports to York are Leeds Bradford Airport  (the closest, but not the easiest to travel to York, as there is no direct train service), and Manchester Airport, but you may find that other airports will be more convenient for your journey. The university International Student Support webpages give advice on travelling from the airports to York.

York is one of the most popular tourist destinations in the Uk, so it is worth booking your accommodation early. Even in 'low' season, there are major events, such as the York Races and Festivals, that attract many people.

The list below offers suggestions of hotels and B&Bs within easy walking distance of the King's Manor which is on the north edge of the walled city of York, in order from most expensive to least expensive.

The Centre for Eighteenth Century Studies at the King's Manor is situated in the centre of York, not on the main University of York campus at Heslington. However, there are frequent bus services from the campus to the rail station at York, which is near the King's Manor. The University of York can offer accommodation at competitive prices, both during the vacations and termtimes: York Conferences rooms 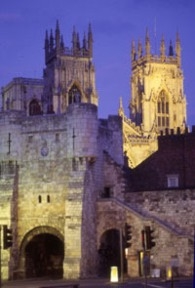