Welcome to the Borthwick's November newsletter.

Letter from Lydia Rowntree to BSR: Letter describing in great detail a Zeppelin raid on York as seen from The Homestead, 28 November 1916. RFAM/BSR/JRF/1/2/5

In October we were asked to contribute to the university’s Black History Month resources for schools and colleges.  As in many archives in the UK we are all too aware that our holdings largely tell the stories of white, and often male, individuals, many of whom were from privileged backgrounds.  Where Black stories are told, they are often stories of violence and oppression.  In recent years the archives sector worldwide has begun to grapple with what our role has been in preserving and promoting a certain view of history and how much the ‘neutrality’ that the sector prides itself on has ever truly existed.  When we were approached by the organising committee we decided to use one such document, an account of a Virginian slave auction written by Quaker Benjamin Seebohm, to ask some difficult but important questions about who is represented in our archives and why.  You can read our piece here and see images of the original document.  We would welcome your thoughts and comments.  Please be aware that the document relates to slavery and contains slavery related language which would not be used today and which could be upsetting.

We have also launched our very own Borthwick Podcast ‘Out of the Archive Box’.  The first episode is introduced by Keeper of Archives Gary Brannan and features archivist Sally-Anne Shearn sharing insights into the thrills and dangers of the early railway and the development of the great railway town of Crewe, drawing on the 19th century correspondence of Annabella Crewe, held here at the Borthwick.  You can listen to it now at iTunes, Spotify and Anchor.fm/borthwick.  Stay tuned for more adventures in the archives!

In October we received a number of new additions to existing archives.  Many of our archives are ‘works in progress’ as the organisations who created them remain very much active and regularly deposit new and more up to date records with us.  In the past few weeks we’ve received several new boxes of records from the Yorkshire Wildlife Trust concerning the work of Mary Sykes during her time with the Trust.  These include papers and slides relating to YWT sites such as Askham Bog, Moorlands and Spurn.  Once these have been processed they will be added to the 173 boxes of YWT papers, slides, photographs and other materials we already hold.

A more unexpected accession was a group of membership cards for the York and District Field Naturalists’ Society which came to us via an eagle eyed researcher who spotted them on Ebay and bought them to ensure they were saved for the archive here! The earliest cards date from the foundation of the Society in 1874 and the latest to 1973.  The small collection also includes the Society’s annual printed programmes of talks and events and they’ll be a valuable addition to the archive.

If you take a look at our online catalogue Borthcat you’ll notice a few new additions! In October we added the full catalogue for the Records of Richard Frederick Wood, Baron Holderness.  Lord Holderness was the son of the Earl of Halifax.  His archive spans his school and university years, his military service during the Second World War and his long political career as Conservative MP for Bridlington and, in succession, Minister of Power, Minister of Pensions and National Insurance and Minister of Overseas Development.  It also includes multiple drafts of his unpublished memoirs, offering an intimate portrait of his family and social circle, which included Kathleen ‘Kick’ Kennedy, sister of American President John F. Kennedy, and Lady Brigid Guinness whose letters reference her work as a wartime auxiliary nurse.

We’ve also begun adding more of our Southern African archives to Borthcat, most recently the South Africa Papers collected by the university’s Centre for Southern African Studies in the 1970s and 1980s, and the Papers of Gwen Coleman, a leading figure in the Bulawayo Little Theatre in Zimbabwe.

As well as new complete catalogues we’ve been working hard to improve and expand existing ones.  We’re very pleased to say that we’ve now finished adding all of the patient indexes for Clifton Hospital, previously the North and East Riding Lunatic Asylum, to Borthcat.  This very useful indexing work was carried out by the York Family History Society and we’re extremely grateful to them for their efforts.  You can find the patient indexes under Admission Forms and Reception Orders and under Male Case Books and Female Case Books.  We’d love to know if the indexes help you with your research!

Borthwick Archives in the Media

You might have heard the Borthwick mentioned in a recent episode of the podcast You’re Dead To Me, presented by Greg Jenner. Greg was joined by chocolate historian Alex Hutchinson to talk about the culinary and cultural history of chocolate.  The Borthwick holds the archives of the Rowntree Mackintosh and Terry’s of York confectionery companies.

Dr Marianne Wilson can be seen on YouTube talking about ‘Chantries and communities in the Archdeaconry of Nottingham’, based on her work on the Archbishops Registers here at the Borthwick.  Dr Wilson is part of the Northern Way project team, which is working to make the administrative records of the medieval archbishops of York more accessible.

Finally we were thrilled to welcome a filming team from BBC’s Countryfile to the Borthwick recently to talk chocolate and Christmas with our Keeper of Archives Gary Brannan.  We’ll let you know the airdate for the episode in December.

Archive of the Month: Records of the Wilberforce Memorial

You might not guess it from the title but this archive charts the foundation and development of the pioneering Yorkshire School for the Blind.  The funds came from a ‘memorial’ or fund raised in memory of Yorkshire MP William Wilberforce in 1833, which explains the title.

Where can I find it?

The full catalogue of the Records of the Wilberforce Memorial is available on Borthcat.

Why is it Archive of the Month?

The Yorkshire School for the Blind opened in King’s Manor, York, in 1835 and continued until 1969.  The archive includes administrative, staff and pupil records, photographs and artefacts, among many things.   At a time when opportunities for the blind were limited, the school set out to ‘provide sound education together with instruction in manual training and technical work, for blind pupils, between the ages of five and twenty’.  It also organised employment for a limited number of older blind people and promoted ‘such other agencies for the benefit of the blind as may enable them to gain their livelihood, or spend a happy old age’.  The archive includes a substantial library of books and pamphlets relating to the study of blindness, sourced by school staff from around the world.  The archive is an important source of information about the lives of those living with disability in the 19th and 20th centuries and its legacy is still with us.  One of the masters at the school invented a counting frame for blind children that is still used today! 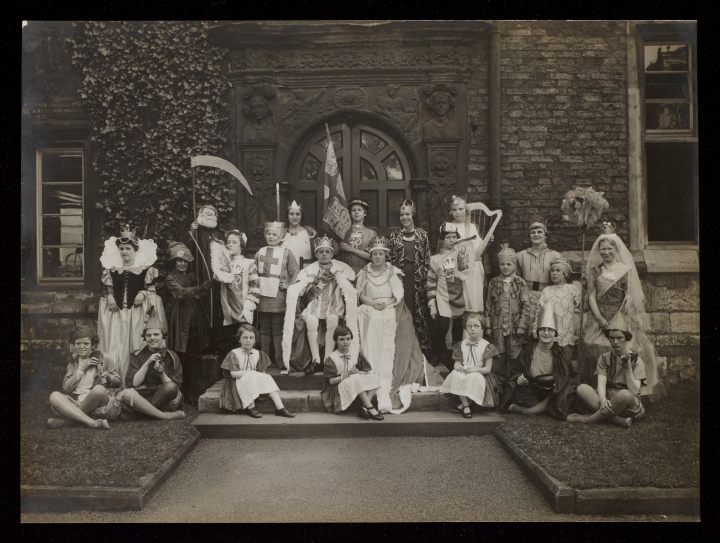 That’s all for this month, stay safe and we’ll see you in December!