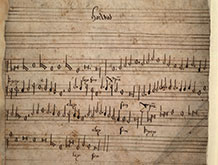 We hold the archives of some individual composers, such as Wilfrid Mellers, Trevor Wishart and the archives of performers such as Electric Phoenix, the York Waits, and York Symphony Orchestra.

The MacCarthy-Foulds archive relates to the violinist and Theosophist Maud MacCarthy and her husband, the composer John Foulds.

We also hold the manuscript of the early 16th century York Masses, and the archive recordings of 20th century public music performances which have been collected by the charity Music Preserved.

Founded in 1987, Music Preserved is a charity dedicated to preserving and making available private recordings of classical music, made either off air or at performances, and for which no other source exists. The recordings span the 1930s to the 1990s.

The Music Preserved Archive includes broadcast recordings from Lord Harewood's personal audio collection. These date back to the 1930s and 40s, and include nearly 1,500 acetates and reel-to-reel tapes of broadcast public performances, with special focus on opera and art song. We also have the private recordings of Sir Charles Mackerras, and live performance tapes from the collection of the British tenor, Richard Lewis, among others.

In partnership with Music Preserved, the Borthwick and York Digital Library is making these recordings available, through a free audio streaming service.

The same site hosts the searchable catalogue of recordings. The size of the archive means that not everything is catalogued, and not everything has been transferred to a digital format for listening, both of which are continuing processes. If there is a recording you would like to listen to that is not yet available, please contact us.

This collection of commercial recordings includes nearly 20,000 rare jazz 78s and LPs, including many test recordings. The Davies materials give the Department an extraordinary resource for research and for teaching in jazz history.

John R.T. Davies (1927-2004) was a collector and remastering engineer of classic jazz records, a trombonist, trumpeter and alto saxophonist and a member of the 1960s jazz revival band The Temperance Seven. He was considered by many people to be the world's leading specialist in the art of sound restoration, specifically in relation to jazz and blues recordings before the introduction of magnetic tape. John’s collection of almost 20,000 shellac 78s is rich in rare recordings from 1917 to 1940.

As well as the recordings that John issued under his own ‘Ristic’ label (Ristic was his childhood nickname) the University has made digital copies of around 6,000 sides to date, which will be made available via York Digital Library.

More information about the University of York Sound Archives is available on the Music department's website: