My primary research interests are centred on how, when and why humans have utilised fur-bearing species. I am looking for spatial and temporal trends, with Great Britain as my geographical starting point. I am interested in what can be learnt by synthesising data from published and grey literature.

I have already completed some analysis of data from Scottish sites. The archaeological presence of foxes at Orcadian Iron Age sites is well known. However, my research, synthesising data from all over Scotland, emphasises the peculiarity of finding this species on Orkney at this time, and raises interesting questions regarding the role foxes may have played in Orcadian Iron Age human settlements.

E.H. Fairnell (in preparation) Farmers, foxes and fur: their significance in Iron Age Orkney. In: A Walk on the Wild Side (session led by J. Mulville). Proceedings of the 10th Conference of the International Council for Archaeozoology, Mexico, 2006

E.H. Fairnell (2003) The utilisation of fur-bearing animals in the British Isles: a zooarchaeological hunt for data. MSC in Zooarchaeology, University of York MSc (PDF

I obtained a BSc in Environmental Biology and Anthropology way back in 1985, from the then Oxford Polytechnic. In 2002 I returned to higher education at the University of York, obtaining an MSc in Zooarchaeology in 2003. Since then I have remained at York, studying part-time towards a PhD.

In the 1980s one of my hobbies was taxidermy, and this was put to some use when I worked on the collections and dioramas at Plumstead Museum, London, in the mid-1980s. Since 1987 I have been a scientific, medical and technical copy-editor. 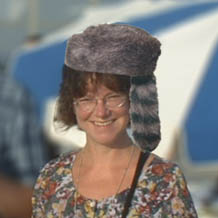