This project took place between 2007-2009, and was a joint Saudi-UK project, led by Geoff Bailey and Abdullah Alsahrekh (King Saud University), as a continuation of the Africa-Arabia Connections project.

Considerable interest has focussed in recent years on the 'southern dispersal route' for Pleistocene human dispersal between Africa and Asia, i.e. across the southern end of the Red Sea and directly into the Arabian Peninsula and around the coastline of the Indian Ocean into southern Asia, especially for anatomically modern humans within the past 150,000 years.

However, despite numerous surface finds of stone tools in the Arabian Peninsula and much speculation there is a:

This project built on the results of the Africa-Arabia Connections project and was designed to continue field explorations and field observations in the Farasan Islands and to develop the framework of understanding and collaborative arrangements to sustain long-term fieldwork in the region. 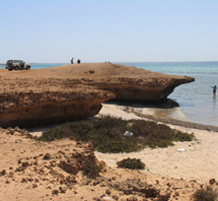