Around 40,000 people in some of the most poverty-stricken areas across the developing world die every year from a parasitic disease called leishmaniasis. Spread by sand flies, it can lead to distressing and disfiguring skin ulcers and scarring, or attack the liver and spleen, resulting in the visceral form of the disease that is often fatal.

York is at the forefront of a worldwide drive to highlight and  tackle this devastating infection - and recent ground breaking developments at the University's  £6 million Centre for Immunology and Infection have prompted new hope in the on-going search for much-anticipated treatment and preventative measures.

A team lead by Centre Director Professor Paul Kaye is making major advances on the development of a vaccine, while Professor Deborah Smith, Professor of Molecular Parasitology and Head of the Department of Biology, is leading a team of scientists from York and Imperial College on a new drug development programme which aims to ease symptoms and reduce the severity of the disease.

Leishmaniasis is a global disease affecting all age groups, with 1.6 million new cases each year across 98 countries. In addition to regions of severe poverty, leishmaniasis is also found in Southern Europe and countries bordering the Mediterranean, where it affects people and domestic dogs. Despite its worldwide prevalence, leishmaniasis is one of the 'neglected tropical diseases', so called because it is largely confined to impoverished communities and historically of low priority for many drug and vaccine development companies - and for national governments. 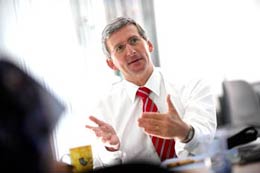 Professor Paul Kaye, Director of the Centre for Immunology and Infection

Professor  Kaye said: "The development of new preventative and therapeutic measures to tackle this disease is becoming a major international research priority. The research being carried out at York puts the University -and the city - on a global stage. Our team are at the forefront of research and are making significant progress in the development of a vaccine and new drug treatments."

"This work has the potential to save hundreds of thousands of lives and ease the untold misery of the millions who are affected by the disfigurement which is often the legacy of the infection. This is a neglected tropical disease which weakens already disadvantaged populations. This is not necessarily the most glamorous area of current scientific research but it is work that really can make a difference on a worldwide scale."

The development of a therapeutic vaccine which aims to provide immunity while at the same time ease symptoms, is at the early regulatory and testing stages. If it gains full approval, the vaccine would be used in conjunction with existing drugs, or new drugs also being developed by the team, as a form of combination therapy.

There are existing treatments for the disease but they are not always successful. Treatment often involves a month-long stay in hospital, undergoing chemotherapy with a toxic cocktail of drugs that can have severe and even fatal side effects.

The cost and length of existing treatments can also be an issue for sufferers in impoverished communities meaning that many patients, particularly families where a number of children are infected, are unable to start or complete courses of drugs.

Professor Kaye and Professor Smith have visited a number of areas where the disease is rife – trips that have taken them to the heart of the shanty towns and slums of some of the poorest areas of the world.

Professor Kaye said: "These trips make you very aware of the societal implications of diseases such as leishmaniasis – if people are ill they can’t work, and the disfigurement caused by the disease can lead to isolation and distress. When you see rows of beds full of adults and children hooked up to intravenous drips in very basic hospital conditions, it certainly brings home to you the importance of the work being carried out here in York." 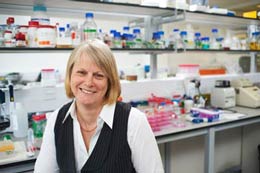 Professor Deborah Smith, Professor of Molecular Parasitology and Head of the Department of Biology

Professor Smith, who was awarded an OBE in 2010 for services to biomedical sciences, is leading the team which first identified that many proteins in the Leishmania parasite are enzymatically modified in a way that makes the parasite vulnerable to attack by drugs

She said: "This research showed that our theoretical plans for drug development could lead to inhibitors that might prevent the disease. It was an exciting moment when the theory became a reality. I have visited many countries where leishmaniasis occurs and have seen first-hand the devastation that can be caused – our research team has the potential to improve the health and prospects for some of the world’s most poverty-stricken communities and that provides a very tangible focus for our work."

The University's Centre for Immunology and Infection combines the research expertise and skills of the Department of Biology and the Hull York Medical School (HYMS). The leishmaniasis research programme is supported by the Wellcome Trust and the Medical Research Council and involves close collaboration with research colleagues across the world, with important contributions from researchers and doctors in countries where the disease occurs including Brazil, Ethiopia, India, Sudan and Tunisia.