A vast area in the middle of the storm-tossed North Atlantic, larger than the UK, now enjoys special protection from over fishing and exploitation, thanks to an award-winning University of York marine biologist, his students and an international team of experts.

In just a generation, many species of fish have been reduced by 99 per cent

The world’s first network of high seas marine protected areas was agreed by Environment Ministers from 15 nations in a show of exceptional governmental co-operation in September 2010. This historic announcement – a world first - was based on extensive research carried out by Professor Callum Roberts and a team of students from the University’s Environment Department.

The new protected area network is the only one in the high seas and is designed to protect fish stocks and restrict activities such as deep sea mining at a time when the world’s oceans and marine habitats are facing growing threats from overfishing, pollution and the increasingly desperate search for mineral wealth.

A legacy for the seas

"It was a very special moment when we heard that the protected areas had been agreed," said Professor Roberts.

"These zones are a real legacy for the seas – we spent a lot of time putting together the research to back the theoretical case for the zones and it was a real thrill to see our ideas make that major leap from concept to reality."

The research carried out [...] in York proves that seas and marine life can recover if action is taken

Professor Roberts hopes the new areas have trailblazed a path for future international co-operation to set up similar zones in other high seas areas, a move that he says is essential if we are to avoid the continuing collapse of our marine ecosystems.

It's an argument he has developed over a lifetime’s research backed by two highly acclaimed books that set out the depth of the problems facing our marine habitats in alarming detail.

"The Unnatural History of the Sea" was named one of the Washington Post's ten best books of 2007. It sets out the history of fishing from the dawn of commercial sea fishing in eleventh century Europe to the high-tech methods employed by modern fleets which have done much to bring many species of fish to the brink of collapse. This was followed in 2012 by "Ocean of Life: How our Seas are Changing", which sets out in stark detail the scale of destruction from human activities to fish stocks, coral reefs and marine habitats. The significance of the concerns highlighted by the book was underlined when Professor Roberts was awarded the prestigious Mountbatten Maritime Award for best literary contribution of 2012.

The stark facts uncovered by Professor Roberts and his students at York are that in just a generation, many species of fish have been reduced by 99 per cent, fishing fleets in England and Wales now have to work 17 times harder to catch the same amount of fish landed in the 1880s and without action, some stocks could collapse completely within the next 40 years.

Our marine waters are struggling to cope with increasing levels of toxins and fertilisers – and plastic packaging swept up on sea shores around the world is a very visible reminder of marine problems that previously remained hidden beneath the waves. 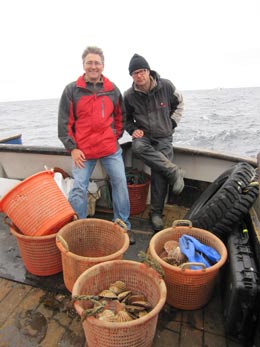 The North Atlantic marine protected areas are an important part of efforts to reverse the decline – and studies carried out at York also point to the success of smaller marine reserves around UK waters. It's an issue set for further public debate in the second series of TV chef Hugh Fearnley-Whittingstall’s Fish Fight campaign which includes interviews with Professor Roberts.

"Increased protection measures for the sea do not always involve major political upheaval, but they do require a major overhaul of our attitudes towards the sea and the way we treat it," said Professor Roberts.

"The research carried out at the Environment Department here in York proves that seas and marine life can recover if action is taken, but it also shows time is running out. Governments around the world need to change course now if we are to avert the disaster that awaits not too far in the future."