A high-profile conference series, spanning 2012 through 2013, which covers the contemporary crisis and changes in urban systems. Full details can be found within the document below:

For details about the event, please click on the appropriate tab. To register for this event, please follow the link below. The registration fee for the two-day conference is £80, which includes a lunch on both days, refreshments, and dinner and wine on Thursday evening. Research students can enjoy the discounted rate of £35, but valid student ID will be required.

The global financial crisis has provoked re-analysis of the limits and social harms associated with our economic systems and its relationship to urban life. The move to conditions of an economic reverse, a crash of arguably unprecedented scale, has been met with wavering commitments to expand and draw-back from the public financing of both private and state institutions. Proposals in many western and other countries globally for massive public cuts raise the prospect of economic stagnation and indeed social pain generated by the withdrawal of state supports for the most marginal members of society. This context presents important challenges to critical social analysis.

What will this crisis, and its unwinding in different social spheres and spatial contexts, mean for cities globally and nationally? How can we effectively monitor, critique and add to public debates, community action and institutional ways of thinking that might encourage more genuinely progressive and incisive diagnoses of the collapse of urban conditions? This conference series has been created to address these issues by creating a space for dialogue and the dis- semination of research and ideas around how urban life has and will continue to be transformed by this most recent and dramatic set of transformations in economic systems globally.

Prior to the crash of 2008 much criminology and social policy analysis presented us with an impression of policing that mixed styles of zero-tolerance with more community-centred forms. The  question of community safety and harm reduction more generally has given way in the past decade  to a broader sense of anxiety and crisis that meshes a number of military style public engagements  (on terror, drugs and crime) with local actions on anti-social behaviour and community fracture,  itself generated in many instances by previous rounds of industrial loss and crises of masculine and  community identity.

New forms of extreme political affiliation have supplanted or been rolled-into  conventional policy systems while security itself has become more fully embedded in aspects of  urban and neighbourhood life. How can we understand human and urban modes of security after  the crash? What are the prospects for pro-social, joyful and vivacious community life? How can the  question of social control be articulated in relation to notions of accountable, locally effective and  engaged patterns of policing?

Housing remains at the epicentre of the sense of crisis and economic malaise in so many cities globally. Not only does the cost of private housing continue to stagnate but discourses of unending asset price growth and the security of ownership as a means of attaining personal wealth have largely been punctured by the strangulation of mortgage finance, unease around the impact of public funding cuts and a more general questioning of the pyramidal nature of such investment. Alongside this ‘crisis’, also a potential opportunity to those locked-out of the previous boom, is another in public housing and welfare assistance. In this sector financial retrenchment highlight the potential for new forms of gentrification and household displacement as these forms of state aid are withdrawn in the name of financial austerity. How will major and minor cities be re-organised by these new economic and social imperatives? What opportunities remain for organised and flourishing forms of capital even within the apparent decline of private finance? What forms of resistance, action and progressive change can be mounted by communities and individuals in these contexts?

Massive and rising inequality in urban centres in the west raises the significant question of social cohesion in the face of illegitimate private wealth. The possibility of communal forms, supports and mutuality has been undermined not only by the expansion of various gaps and indicators but also by a developing sense of a social duality that revolves resources and culpability for the crisis conditions present in many urban centres. Points of city resilience are set against those of vulnerability and social frailty, those that have been floated out of or bailed out of errors of financial judgment are more firmly set against those without in contemporary public conversations mediated by a communication infrastructure that was largely absent in previous rounds of capitalist crisis. How can we understand ideas of community, support and social health in the context of this crisis? What purchase and value do notions of collectivity, shared resources and public life hold for modes of community, public and corporate forms of governance?

Immigration and diversity lie at the heart of electoral contests globally in recent years. The liberal consensus around multi-culturalism saw its first signs of crisis around the Salman Rushdie affair and went into a sharp reverse after the events of 9/11 as national policy agendas, party leaders and the mainstream media took an increasingly hostile view of ‘cultural enemies within’. At the same time, the sense of economic crisis, for commentators like Slavoj Zizek and John Gray, has gripped mainstream political thinking, the value of national in-groups has been raised by the force of uncertainties themselves generated by financial uncertainty and declining public supports. What then is the place of notions of social diversity, diaspora and social hybridity in the wake of  of the economic crisis and rising levels of intolerance and suspicion of assertive cultural and religious difference? 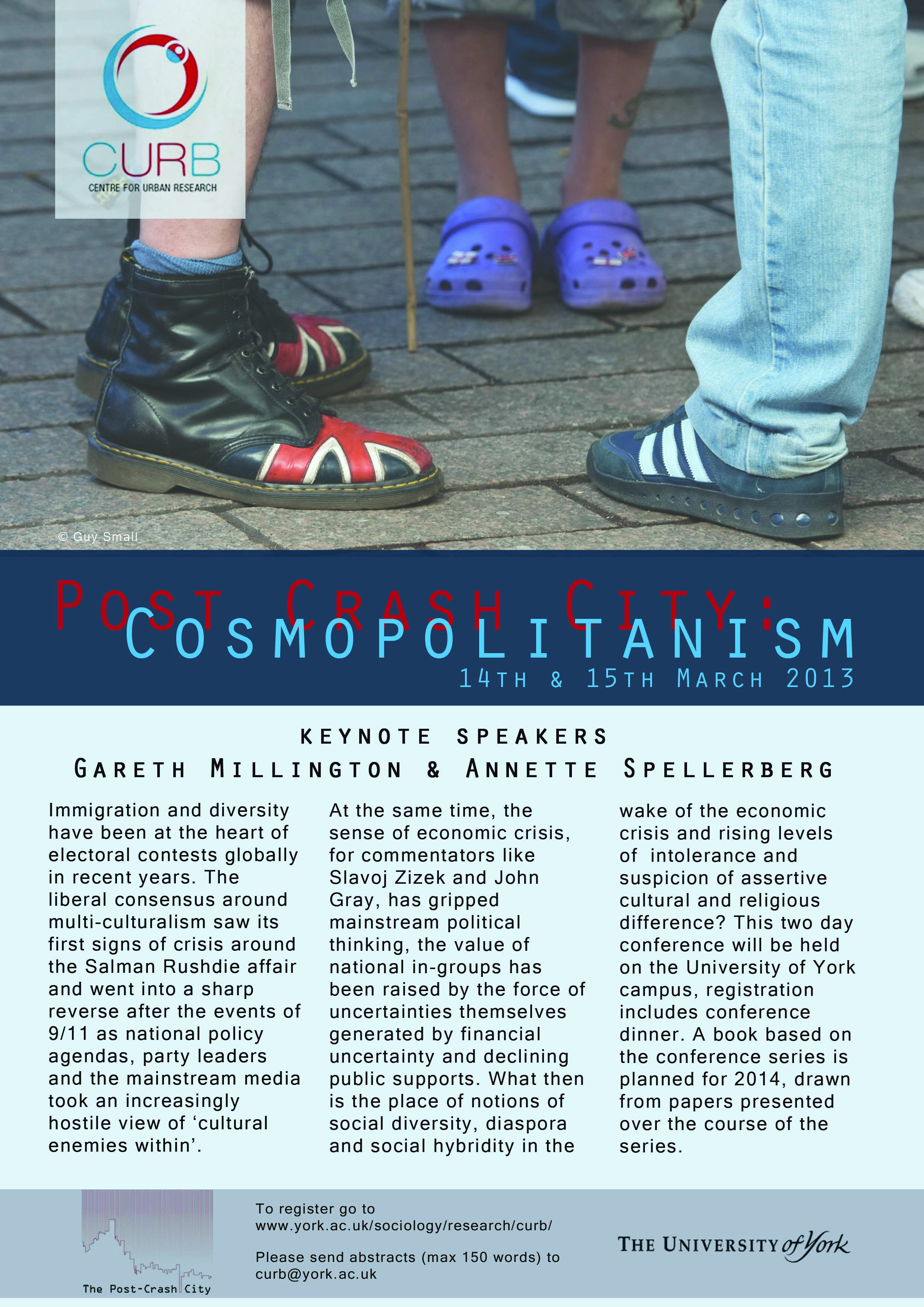 A focus on the city as the epicentre of new economies shifted in tandem with the broader move to employment in the financial, creative and service sector economies of many western nations. In countries like the US and UK the roll-out of thinking around economic development attached to these sectors has meant a kind of creative city franchise that has proved not only unsatisfactory, but also ineffective in combating the problems of structural unemployment, educational priority setting and distinctiveness. The predominance of populations in global urban centres returns the question of economic vitality and logics to the centre-stage of debates about social futures, sustainability and human dignity. How are we to understand the role, nature and re-working of urban economies? What models of economic activity, structure and imperatives appear likely to yield more positive and less crisis-prone economies?

The Post-Crash series will be held at the University of York’s new Heslington East Campus. The building has state of the art facilities and excellent lecture room accommodation. Each meeting will include a keynote contribution by an internationally prominent York academic and an invited guest speaker and will take place in one room (to ensure maximised and cumulative discussion around issues) over two days. Conference fees will include the conference dinner in central York. A relaxed, focused and convivial space for discussion is assured.

Five events over two years will culminate in an edited book collection that will be presented in an incisive yet accessible format. The paper presentations from each meeting will be recorded and generate a podcast bank that will be placed on the CURB website and will be made publicly accessible. The book will be launched in Autumn 2013.

The two day meeting including two lunches and both dinner and wine will cost £100. Reduced rate fees for research students and speakers from non-academic sectors can be discussed directly with the conference convenors.

Please send all abstracts and address any queries to rowland.atkinson@york.ac.uk

More about CURB, the Centre for Urban Research at York

The Centre for Urban Research at York (CURB) is the fruit of an extensive and long-running collaboration between academics with a research, teaching and policy interest in urban studies at the University of York. CURB exists to bridge the gap between abstract thinking, social progress and diverse forms of community engagement. We see the urban as a place of human interaction, production, creativity, conflict and consumption. Yet, in order to understand what makes cities work or fail, research efforts must point not only to the lives of individuals in the city, but to the behaviour and organisation of urban systems, cultures and life-worlds more generally.

CURB seeks to address a number of potential opportunities for research, teaching and public engagement: