The learning centre, by Oznur Yardimci

Its well past noon and I am at the Barking learning centre. I head down the corridor to the right of the entrance, where the toilets and the Gallery were located. I peep into one of the rooms to see what is going on. I notice it’s a University of East London Information and Guidance office and next to it, a white woman is making a PowerPoint presentation. Two teenage women, one white and the other black, are listening.

The learning centre is very busy. Some people are using desktop computers by the wall, while others are sitting on the sofas in the middle of the room. A few people are playing with their children in the kindergarten area. The centre is equipped with hubs and meeting rooms. The hubs are narrow rooms behind windows with three chairs in each of them. The meeting rooms are larger rooms with doors. Three of the hubs are occupied by visitors and learning centre personnel. It looks like the personnel are asking questions to the visitors and recording their responses down on paper. A black woman with a baby carrier joins the queue in front of the Citizens Advice Bureau. The bureau is staffed by white women, and three men of colour stand guard as security. Atop the coffee table in the waiting area nearby sits an information note on Windrush.

I sit on one of the sofas in the middle of the room. It is about 2.30-3 pm. A black man walking with a stick and a piece of paper in his hand enters the centre. A staff member promptly asks him ‘what’s going on’. He starts saying something to her which I can’t hear, but it seems like he is complaining about something. At some point they both laugh. Then they head to one of the hubs and continue talking behind the windows. I see another young man sitting at the other edge of the long line of sofas, looking carefully at the forms he is holding. He then stands up and joins the queue in front of the Citizens Advice desk. There are now eight people waiting in the queue. A staff member, a mid-aged white woman, announces suddenly: “Can I ask you to stay behind this sign, sorry, just to allow more space to the people working in the desk?’ She uses her hands as a gesture to show people what they are expected to do. The people standing in the queue promptly step back. 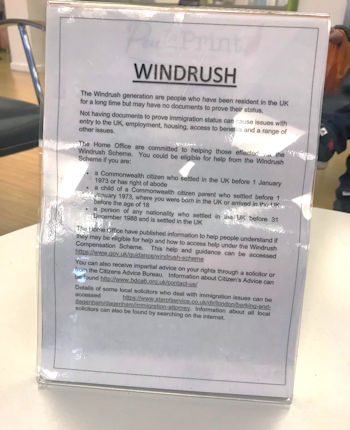