Dr Sofia Vasilopoulou is a Professor of Politics at the University of York. She holds a PhD in Politics from the London School of Economics.

Her work examines political dissatisfaction with democracy and democratic institutions across Europe. Specific themes include Euroscepticism, extremism and loss of faith in traditional politics. Her research is situated in the broader fields of European Union Politics, Comparative European Politics, Political Behaviour and Party Politics.

She currently leads an ESRC Future Leaders Project entitled ‘Euroscepticism: dimensions, causes and consequences in times of crisis’. For information on the project, please visit http://euroscepticism.org/

Her research appears in the European Journal of Political Research, Journal of Common Market Studies, European Union Politics, Journal of European Public Policy, Government and Opposition, Nations and Nationalism, South European Society and Politics, among others.

She has authored Far Right Parties and Euroscepticism: Patterns of Opposition (ECPR Press and Rowman & Littlefield) and co-authored The Golden Dawn's Nationalist Solution: Explaining the rise of the far right in Greece (Palgrave Macmillan 2015 with Daphne Halikiopoulou), also published in Greek by Epikdro.

She is the co-editor of the European Journal of Political Research and the convenor of the ECPR Standing group on Political Parties.

She is external examiner to the MSc Democracy and Comparative Politics, Department of Political Science, University College London.

Prior to joining York, she was a Fellow in Comparative Political Analysis in the School of Public Policy, University College London, and a Teaching Associate in Politics at Aston University, UK. In 2014 she was a Visiting Research Fellow at the University of Zurich.

She was awarded the Peter Mair Party Politics Prize for the Best Paper delivered at the annual 2008 ECPR Summer School on Parties and Party Systems.

Sofia works on a number of projects broadly examining the theme of political dissatisfaction with democracy and democratic institutions across Europe. More specifically her research interests include:

The findings of her research feed into debates about democratic legitimacy, accountability and representation in Europe and the European Union.

Sofia welcomes research applications in any of her areas of research and expertise. 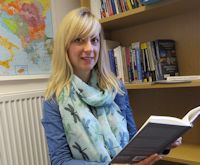