Martin Smith was appointed as Anniversary Professor of Politics in 2012.  Previously he was Professor of Politics at the University of Sheffield and has also taught at the Universities of Essex, Kent and Brunel. At the University of Sheffield he was Head of Department between 2001 and 2005 and Faculty Director of Research between 2008 and 2012.  In this role he played a leading role in the development of the ESRC funded White Rose Doctoral Training Centre.  Martin was educated at the University of Essex where he completed his PhD on the politics of agriculture in 1988.  He has also been a visiting Professor at the University Pompeu Fabra in Barcelona.  He was appointed as a member of the Academy of Social Sciences in 2010.  His main research interests are British Politics, Public Policy and State Transformation.  He has published 14 books and over 100 articles and chapters.  He has also received research grants from a number of funding bodies including the ESRC and the EU.

Martin’s main research covers various aspects of British politics including central government, civil service reforms and politics parties and public policy, where he has focussed on policy networks, policy making, policy implementation and leadership.  He also has an interest in theories of the state and the changing nature of state power.   He has undertaken a number of funded research projects including studies of the British Core Executive, the Changing Roles of Ministers and Civil Servants, Policy Implementation and the Regulation of Private Security.  Current research projects include:

Martin has supervised a large number of students to completion.  Recently supervised topics include:

Martin is happy to supervise students on British Politics, Public Policy and State Reform.  He is particularly interested in supervising students on economic crisis and public sector reform, central government, political parties and the securitisation of domestic politics.

Martin has taught a wide range of courses including British Politics, Public Policy, Political Economy, Methods in Political Science and Comparative Politics.  The aim in these modules is to encourage students to challenge their preconceptions about politics by getting them to think about political issues from different perspectives. Consequently, it is important to look critically at many taken for granted assumptions about politics.  The seminar provides an opportunity for bringing different conceptual tools to bear on real world problems as a way of opening up new ways of seeing and understanding the processes of politics.

Much of Martin’s research has involved engagement with policy makers.  In particular the research on private security was partly funded by the Security Industries Authority.  He has regularly given evidence to Select Committees in the House of Commons and House of Lords (see http://www.guardian.co.uk/public-leaders-network/2012/jun/12/ministers-spads-create-parallel-civil-service )  and he has provided advice to the Audit Commission, the ESRC, the Electoral Commission, the National Archive and the European Union.  He has also worked with Sheffield City Council on digital services and the impact of retrenchment. Between 2005 and 2011 he was editor (with Mathew Festenstein) of the journal Political Studies. He has been external examiner for degrees and PhDs at a number of universities.  He has recently been appointed to the ESRC’s Evaluation Committee. 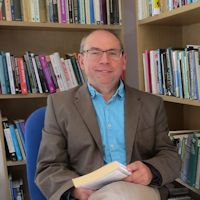 Feedback and Guidance hours for this term - by appointment only