A University of York student is set to compete at the Paralympic Games in Tokyo as part of Team GB’s squad. 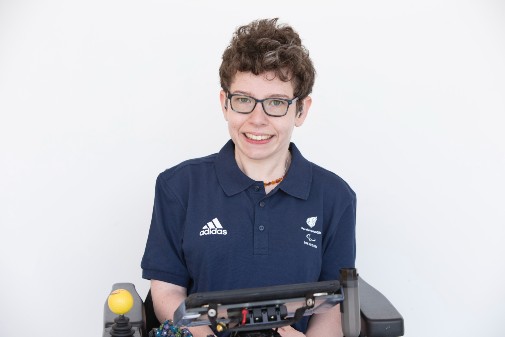 Beth discovered boccia at the age of 10 Pic credit: imagecomms.com

Beth Moulam, who graduates from the University this week (Thursday 26 August), is going for gold in boccia.

Boccia is one of three Paralympic-specific sports which has no Olympic counterpart and is for athletes with conditions like severe cerebral palsy and muscular dystrophy that affects all four limbs.

The sport is played indoors on a court similar in size to badminton with players positioned at one end. From a seated position, players propel balls to land as close as possible to a white marker ball, known as the Jack.

Beth will compete in the BC3 category of the boccia - with matches starting on Thursday 2 September, through to Saturday 4 September.

Before then, Beth will also graduate from York with a degree in Social Policy, attending the ceremony virtually from Japan, where she will take part as one of the student orators.

For many years, Beth dreamt of competing at the Paralympics. She said she discovered boccia at the age of 10 and was first inspired by sprinter Caroline Innes winning medals at the Sydney Paralympics in 2000.

Beth said: “I was bowled over that someone with cerebral palsy could run and win. Caroline has a speech impairment like me. If she could win and be on that world stage, so could I.”

“It is an amazing ball sport created for those with complex physical disabilities, a bit of a cross between bowls and boules. Whether you can throw or need to use a ramp - there is a way to play and compete. In my very first competition, I discovered I was fiercely competitive and knew I had found my sporting passion.”

“Over the years, I have never lost sight of my dream. York gave me the time and space to study alongside training and competing, first for England and then with the UK Boccia Federation (GB).”

Beth also has fond memories of studying at York.

She added: “York was my number one choice for the campus, the welcoming staff and its reputation.”

“Due to my disability, it takes me much longer to do most things, including academic work. But because Tokyo was postponed a year, it meant I could use the time during the pandemic to complete my studies, submitting my final work in January this year.”

After Tokyo, Beth’s sporting focus turns to qualifying for Paris 2024, where she intends to be on the podium in her own right as an individual player.

She also wishes to work with people who have complex physical disabilities and communication impairments, and to raise awareness of augmentative and alternative communication (AAC), resources that support communication including paper-based systems, and electronic communication aids (such as those used by Stephen Hawking).

“I have always been a dreamer, and over the last few years, I’ve been immersed in making my dreams come true. First by graduating and now by being selected for Tokyo.

“It has been a long haul, enjoyable and hard work, but that commitment is paying off. My aim now is to breathe, enjoy the experience and do what I have been training for: to hopefully give GB the best possible chance of winning a medal.”