An inclusive road crossing which features the colours of the Progress Pride Flag has been unveiled at the University of York. 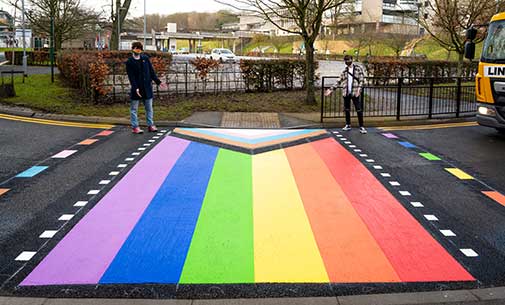 The crossing – which has been completed ahead of LGBT+ History Month in February – is a symbol of the University’s commitment to inclusivity and celebrates the diversity of all its staff and students.

The Progress Pride Flag includes all the colours of the Rainbow Pride flag which is widely recognised as the symbol of lesbian, gay, bisexual and transgender (LGBT+) communities, as well as the black and brown stripes to represent marginalised LGBT+ communities of colour, along with the colours pink, light blue and white, which are used on the Trans Pride Flag. In addition, the black and brown stripes also represent those living with AIDS, and those no longer living.

The current crossing point, outside the Spring Lane Building on Campus West, had been due for renewal and so the student and staff LGBTI+ Matters Staff Network and several academic staff, including Professor Paul Johnson, suggested the installation of a new inclusive crossing. The crossing also has new dropped kerbs and tactile paving to ensure it is accessible for all.

Professor Johnson from the Department of Sociology said: “The crossing is a public representation of the University's commitment to LGBT+ equality. It sends an important message to all members of the university, that LGBT+ people belong and are valued in our community.

“Most importantly, it is a permanent reminder to us all that promoting equality, and challenging discrimination, are daily actions that concern us all. Only together can we create and sustain a community in which each and every one of us is valued and esteemed for who we are.”

Professor Kiran Trehan, Chair of the University’s Strategic Transport Group, said: “We welcome a crossing for everybody on our campus.  Incorporating the Progression Flag, we hope that the new crossing will signify the University’s commitment to equality, diversity and inclusivity."

Carly Precious, Community and Wellbeing Officer at University of York Students' Union, YUSU said: “The crossing is a way of integrating inclusivity into our everyday lives and symbolises our goal to be a welcoming and accepting community.”

The colourful crossing, which is located on the existing informal pedestrian crossing point on a road owned by the University, has a 10mph speed limit and has been safety audited and designed independently by a traffic safety engineer. It also has advance signs either side of the crossing to provide road safety reassurance.