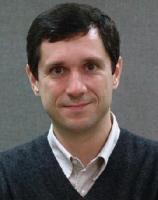 Dr Gianluca Tempesti received a B.S.E. in electrical engineering from Princeton University in 1991 and a M.S.E. in computer science and engineering from the University of Michigan at Ann Arbor in 1993. In 1998 he received a Ph.D. from the Ecole Polytechnique Federale de Lausanne (EPFL), Switzerland with a thesis on the design of fault-tolerant bio-inspired FPGAs. In 2003 he was granted a young professorship award from the Swiss National Science Foundation (FNS). He joined the Department of Electronics at the UY as a Reader in 2006. His research interests include bio-inspired digital hardware, built-in self-test and self-repair, programmable logic, and cellular automata, and he is author of over 75 articles in these areas. He was program chair of the Von Neumann Day (Lausanne, 1997), and program co-chair of the 6th Intl. Conf. on Evolvable Systems (Barcelona, Sept. 2005), as well as member of the program and scientific committees of several international conferences.