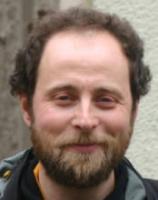 Senior Lecturer;
Chair, Board of Examiners

I was born in 1963 in St.Petersburg (then Leningrad), Russia, and having finished my secondary education at the present-day St. Petersburg Physical and Mathematical Lyceum (then School 239), obtained my first tertiary degree (a taught master's) from St.Petersburg State Technical University (then Leningrad Polytechnical Institute) in 1986, with distinction.

I started work at A.F.Ioffe Physico-Technical Institute, in the Integrated Optics Laboratory, working on theory and modelling of various semiconductor optoelectronic devices - integrated optoelectronic switches, superluminescent photodiodes, but mainly semiconductor lasers. My PhD (“candidate in physical and mathematical sciences”) thesis, defended in early 1994, included work on spectral properties of semiconductor lasers (including advanced single-frequency constructions), polarisation properties under pressure, and fast dynamics including gain switching and self-sustained pulsations. Nearly all the work was in collaboration with experimentalists.

The work included two overseas work placements - at the University of Kassel, Germany, in 1991, working on optimising gain-switched lasers for laser radars, and the University of Bath, UK, in 1991-1992, where I did some work on fast dynamics of semiconductor lasers and also happened to get talking to the girl sitting at the computer terminal (as one did those days) next to me, which eventually led to her becoming my wife.

From 1993 to 1999, I was a Research Assistant at the Department of Electronics and Electrical Engineering in the University of Glasgow. The work concentrated on ultrafast dynamics of laser diodes, including designing and analysing mode-locked lasers for all-optical clock distribution and recovery and for microwave over fibre applications.  One of the outcomes was the realisation of the world's highest repetition rate optical pulse generator (2.1 TBit/s).