York has been an important political, cultural, religious and trading centre since Roman times, and is particularly rich in Georgian architecture. With a population of approximately 150,000, York is a university town that’s big enough to feel cosmopolitan but small enough not to be overwhelming.

York is centrally located in the UK, midway between the major capitals of London and Edinburgh, with excellent transport links. We’re just two hours from London by train, and well served by international airports at nearby Leeds and Manchester.

The Centre for Eighteenth Century Studies at the King’s Manor combines a dynamic research culture with a beautiful historic setting. The Centre’s postgraduate study room and computer facilities at the King’s Manor mean students can enjoy exploring the latest online resources from a medieval building in York city centre. You can re-enact eighteenth-century polite sociability in one of York’s many coffee-houses, visit the York Art Gallery across the square, or have lunch in the eighteenth-century York Assembly Rooms round the corner from the Centre for Eighteenth Century Studies. 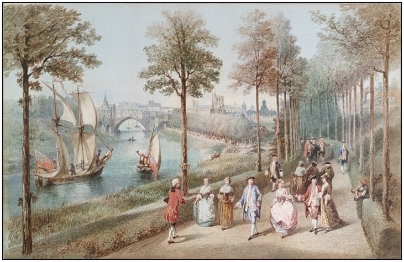 The New Walk by the river used to be a fashionable place to promenade in the eighteenth century, as you can see from this picture.

From the Centre for Eighteenth Century Studies, you can easily walk to:

Yorkshire is particularly rich in country houses. Easily accessible from York by bike or bus, Beningborough Hall has a history spanning 300 years, changing art exhibitions and some beautiful gardens.

Lady Mary Wortley Montagu lived in Middlethorpe Hall for a while. It's now an exclusive restaurant/spa - but they also do traditional teas. It is a beautiful house, well worth a visit if you can afford it.

Castle Howard will be especially worth visiting in the summer, as the gardens are extensive, rolling and green, and there is a large walled rose-garden.

Shandy Hall was the home of Laurence Sterne and where he wrote The Life and Opinions of Tristam Shandy, Gentleman and A Sentimental Journey Through France and Italy.

Harewood House is one of the Treasure Houses of England and was built with money from the West Indian sugar trade.  The gardens were designed by Lancelot ‘Capability’ Brown.

There are many other wonderful country houses in Yorkshire. The University has established a partnership with some to form the  Yorkshire Country Houses Project.

Libraries and Collections in York

The main University of York JB Morrell Library is situated on campus between the Raymond Burton Library for Humanities Research, which houses the Borthwick Institute Archives, and the Harry Fairhurst Building, where you can book study rooms.

The University also has a library at the King’s Manor, which houses collections relating to architecture and gardens, heritage management, stained glass and the "long" 18th Century.

In addition to its print and microfilm holdings, the University Library provides access to an impressive and exciting range of digital resources.

Members of the School have access to a rich and expanding range of resources at York’s libraries. The university library subscribes to Eighteenth-Century Collections Online (ECCO), with thousands of digitized facsimiles of books and periodicals from the period. Amongst the online resources, the university has access to Eighteenth Century Drama: Censorship, Society and the Stage and Eighteenth Century Journals. The university provides access also to major research tools, including Literature Online, the MLA, JSTOR and Project Muse. Access to these and many other databases are available via York metalib .

The Special Collections at the University’s Borthwick Institute holds around 30,000 books on a wide range of subjects. 18th century literature and poetry are found throughout the collection, and two collections particularly support this subject; Dyson and Heath. All items in special Collections can be found in the online catalogue via Yorsearch. More details on visiting here.

The Dyson collection is primarily English poetry with some literary criticism and biography.  Hugo Dyson was Emeritus Fellow of Merton College, Oxford, and one of the Inklings, a literary discussion group that included CS Lewis and JRR Tolkien. Publication dates range from the 17th to the 19th century although there are later editions of Roman and Greek poetry. The collection includes the first and second editions of Wordsworth and Coleridge’s Lyrical Ballads (1798 and 1800), and Coleridge’s Fears of Solitude (1798).

The Heath collection includes holdings in 18th century poetry and other genres. Women writers include Frances Burney, playwright Elizabeth Inchbald and other members of the ‘Bluestockings’ such as Elizabeth Carter, Hester Chapone, Hannah More and Elizabeth Montagu.

Staff and students have access to the holding at York’s Minster Library, which is particularly strong in period newspapers and sermons.  The Old Palace also houses York Minster Archives, which contains York Minster's manuscripts and records which can be consulted via appointment.

A regular bus service also runs from York to the British Library Document Supply Centre at Boston Spa, which provides a comprehensive collection of monographs, manuscripts and rare books.

The York Explore - Libraries and Archives may have some relevant academic works for reference or loan. It has a valuable reference collection of local history materials, including files of local newspapers since the eighteenth century (with subject index), and a collection of some 9,000 photographs of York over the past hundred years. It also has the Sir John Marriott Memorial Library, specialising in modern European history, 1789-1945.  The York City Archives contain not only civic records for York from the medieval period onwards, but also numerous other private and institutional deposits relating to the history of York and its people.

York and North Yorkshire includes a diverse collection of resources for researchers that reflects the area’s cultural and commercial importance during the period. These include Fairfax House, with strong holdings in furniture, domestic artefacts and annual exhibits; the Castle Museum, with good holdings in textiles and costume; Beningbrough Hall; Shandy Hall (Laurence Sterne’s home); The Bowes Museum, with strong collections of paintings and decorative arts; and many other nearby country houses (such as Harewood House).

The University Library and six houses in the Partnership (Brodsworth Hall, Burton Constable, Castle Howard, Harewood House, Lotherton Hall, and Temple Newsam) collaborated in a project to review and create a brief catalogue of their library collections. http://www.york.ac.uk/library/libraries/yorkshirecountryhouselibraries/

From York there are excellent communications by road and rail with the rest of the country. London is only two hours away by train and most major provincial cities can be reached by mid-morning at the latest.

Boston Spa Reading Room
York is  the nearest university to the British Library document supply centre at Boston Spa, the central national repository for the UK inter-library loans service and the largest lending library in Europe. The University provides a free minibus service to the BLDSC on alternate Wednesdays and Fridays, on a pre-book basis through the library's lending services.  Items for consultation at BLDSC should be booked six working days in advance of a visit. A trip to Boston Spa can often save you time and money.

British Library London
The British Library is the world's largest library and one of the world's major research libraries, holding over 150 million items in all known languages and formats. You will need to apply for a reading ticket if you wish to use the London reading rooms.

Library Hub Discover UK & Irish academic and research library catalogue. The most useful way to search for material not held by York libraries.

SCONUL Access is a reciprocal access scheme, granting borrowing privileges to many types of library users working or studying at participating higher education libraries in the United Kingdom and Ireland. (N.B. While it will enable you to use many key libraries, Sconul does not give you access to the British Library, the Bodleian or Cambridge University Library: you will need to apply for separate reader passes for these libraries, so remember to check that SCONUL covers the library you need to use before setting off anywhere! Remember too that some libraries need letters of support/ verification from academic staff, so check on the library websites and ensure you have all the supporting documents you need well in advance.)

Great North Museum Library (Newcastle Upon Tyne) Including the Library and Archives of the Natural History Society of Northumbria, the Library of the Society of Antiquaries of Newcastle upon Tyne (formerly at Black Gate), and Newcastle University’s Cowen Library.

Hunterian Museum and Archives at the Royal College of Surgeons

The Museum of London

The Royal Holloway Collection (An Introduction to the College Picture Collection)

The Tate Gallery, London, with a link to the Tate Collection

The Victoria and Albert Museum, London

Abbot Hall Art Gallery, Kendal, Cumbria, with a link to the Collection

Fitzwilliam Museum, Cambridge, with a link to the Collections

Lady Lever Art Gallery, with a link to Collections

The Hunterian Museum and Art Gallery (University of Glasgow), Glasgow

National Galleries of Scotland, with a link to the Online Collection

Some major & generally reliable online archives of electronic texts include

Don't forget the manuscript and text collections availabe via Metalib