Scientists in CHyM use one of the simplest molecules to solve sensitivity problems in scientific and clinical measurements, parahydrogen.

Parahydrogen is a key component of the research conducted in CHyM. It is one of the chemical feedstocks which is used to increase the sensitivity of NMR and MRI measurements. 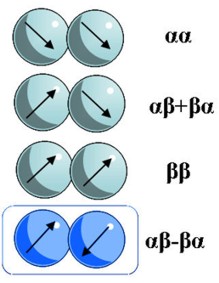 This figure shows the four spin combinations of dihydrogen split into two isomers of orthohydrogen and parahydrogen. The highlighted box indicates lowest energy parahydrogen state that isused in CHyM’s studies.

How do you make parahydrogen?

Parahydrogen is the lowest energy form of H2, so by cooling H2 down (in the presence of a catalyst), more molecules enter this state.

Once created the parahydrogen can be removed from the presence of the catalyst and warmed to room temperature, keeping the high levels of purity obtained in the process. 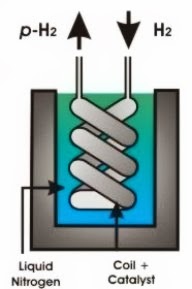 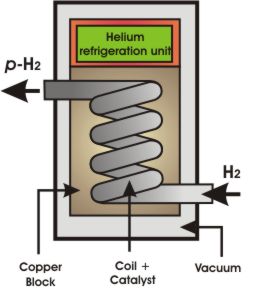 Once created, parahydrogen can be used as a source of polarisation for scientific and clinical measurements. By transferring the polarisation into other materials using hyperpolarisation, chemical and biological processes which were previously invisible can be detected using NMR and MRI measurements.