Launched by Lord Richard Best in the House of Lords

The report was also featured in the Housing Network section of The Guardian newspaper with an article by Hannah Fearn entitled:

The Leverhulme Trust have funded research into current practices of shared ownership in the UK and the findings were launched on Thursday 2nd July 2015 at the House of Lords in an event sponsored by the ESRC.

Lord Richard Best, a prominent member of the House of Lords who speaks on housing issues, hosted the launch. It was an opportunity to discuss the reforms to shared ownership that are necessary to ensure that the hybrid tenure can make a more significant contribution to overcoming constraints in present day housing markets.

Alison Wallace who worked on the research says "It is apparant from our research that there needs to be clear consistent marketing of shared ownership homes, so people understand exactly what they are buying, the benefits as well as the limitations." 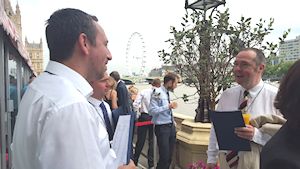 Jules Birch, a freelance journalist who writes about housing and social policy chaired the event.

The report is entitled "Reconciling owning and renting in shared ownership housing: moving forward" and is available here:

Blog on shared ownership written by the research team