The Archbishops’ Registers held at the Borthwick Institute record the formal acts of the Archbishop of York, the earliest register dating from 1225, fifty years before the first Canterbury register survives, and fifty years earlier than the first registers for Carlisle and Durham, the other dioceses in the Northern Province. They are the earliest systematic records of the archbishops’ office, and document the government of the Church, the management and staffing of parishes and the Church’s oversight and regulation of the moral and spiritual conduct of the mass of the population across Yorkshire, Northern England and beyond.

The period covered by the Project spans the struggles over Magna Carta; the Anglo Scottish wars; the loss of nearly a quarter of the population to the Black Death in 1349; the Wars of the Roses; the societal earthquake of the Reformation and the first English Civil War in the seventeenth century.

As can be imagined, the registers deal with a range of subject matter, including:

The registers are key sources for the study of medieval and early modern religious and political history, for art and buildings history, for studies of the historic environment, and for legal and economic history, to name but a few of the areas covered. As a result of the project,  the content of the registers is now open to a much wider audience, including genealogists and local historians.

The aim of capturing and disseminating thousands of high-quality digital images was inextricably linked to the condition of the original Registers and their suitability for digitisation. The project therefore included professional conservation work in order to prepare the York Registers for imaging. This was the very first time that each of the registers has received in-depth assessment and systematic conservation work in order to secure their survival in the best possible conditions for the future.

The primary aim of the project was to capture and make freely available on the web, high-quality digital images of the 10,000 folios  - equal to 20,000 pages - of the York Registers 1225-1646.  A total of 21,775 images were captured, producing around 5 terabytes of data.  Metadata was created for each individual image.  This captured, in standardised terminology, folio or membrane number, as well as additional technical notes regarding structural features of the section of the Register present in the image.

In order to support further research and development using the images, three development objectives were fulfilled as part of the project:

Interface: the creation of a user interface for searching the indexed registers and  browsing all of the registers, including the ability to zoom into the detail of individual images. The ability to browse lists of names, organisations, places and subjects and from there perform searches is also provided.

A two-week residential postgraduate Summer Institute was held at the Borthwick in late July 2015. The Institute included ten students and two Senior Scholars (six from the UK and six from the US) and offered intensive training in the form and content of the Registers, their evolution over time and their academic research potential.

The Institute will involved daily classes in the reading and interpretation of the Registers facilitated by Borthwick staff; followed by daily lectures and workshops from leading academics in the field on the contextual history of registration both in York and further afield. The Institute also featured a day devoted to the Conservation and Preservation of the registers and sessions devoted to DNA sampling of parchment.  The Institute was rounded off by the presentation by the students of  small scale projects devised by each participant. Topics included:

Stories from the Registers 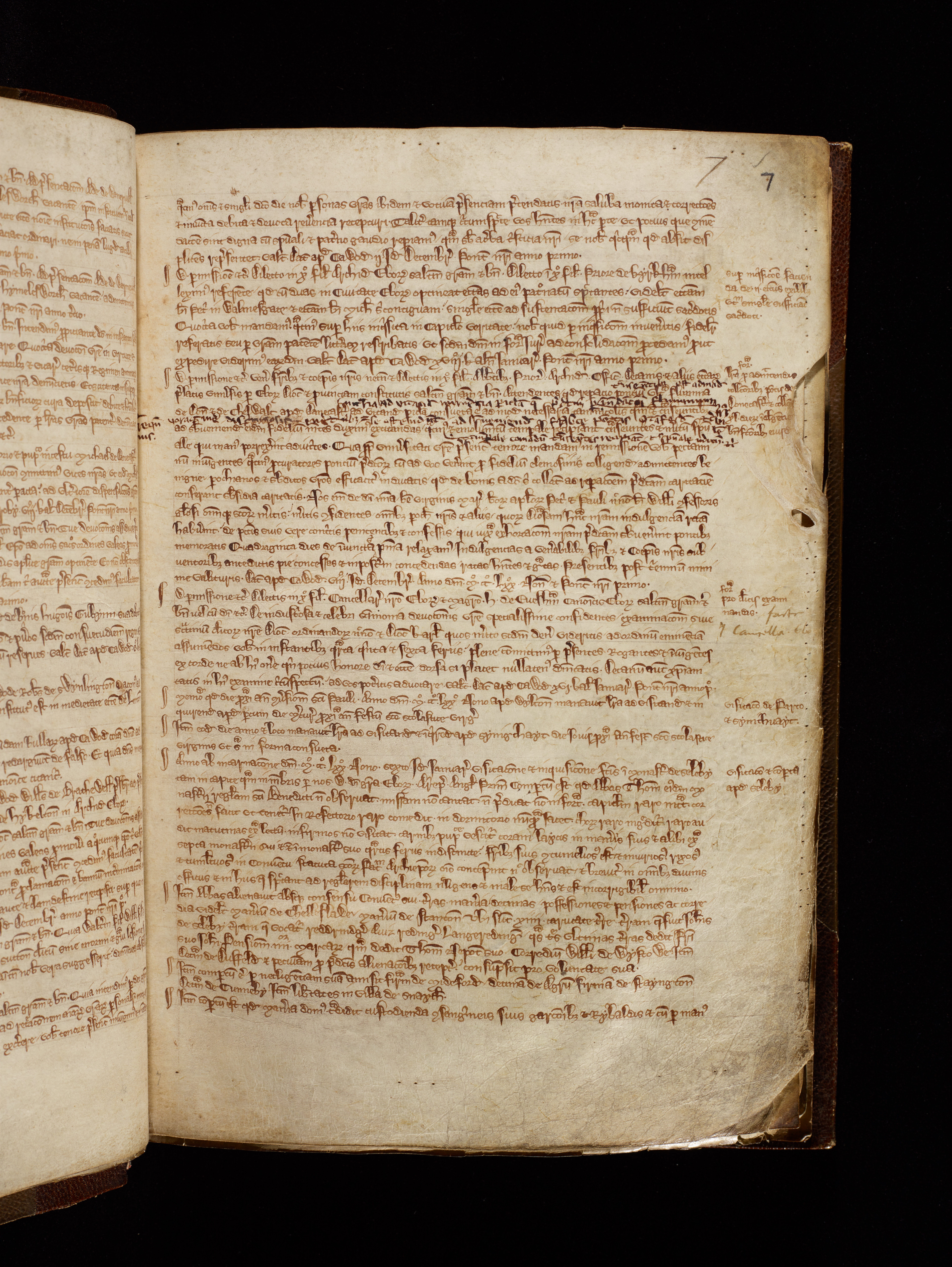 Thomas de Whalley was the Abbot of Selby Abbey. Selby was visited by Archbishop Wickwane around the 8th January 1280. De Whalley was a known troublemaker, and had actually been removed as Abbot of Selby in 1264. On this occasion, Wickwane found that de Whalley ‘does not preach...does not teach...does not correct faults [in others]...never sleeps in the dormitory...does not visit the sick...is rarely out of bed to hear matins (a service ending at dawn)....eats meat with laymen in his manor...ignores the orders of the holy father and his archbishop...has negligent and bad habits and is, overall, incorrigible’. The Visitation also found that de Whalley had managed to lose money by not collecting local taxes due to the monastery; was ‘noted for incontinence’ with two local women - one of whom had apparently borne him a child. Finally, it was found that de Whalley had procured at great expense the services of one Elyam Fanuelle, a ‘sorcerer and fortune-teller’ in the search for the body of his brother, who had drowned in the river Ouse. Unsurprisingly, de Whalley was excommunicated. Little is heard of Thomas de Whalley, save the fact that in 1281 he was reported to have renounced his orders and had, effectively, gone on the run.

The separate ordination register for Archbishop Zouche contains thousands of entries relating to clergy ordained in the Diocese at various levels - acolyte being the lowest, priests being the highest.

Archbishop Zouche issued a warning throughout the Diocese in July 1348 (when the epidemic was raging further south) of ‘great mortalities, pestilences and infections of the air’. The ‘Great Mortality’, as it was then known, entered Yorkshire in c. February 1349, and quickly spread through  the Diocese. The clergy were on the front line of the disease, bringing comfort to the dying, hearing final confessions and organising burials. This, almost by necessity, put them at a greater risk of infection.

Estimates suggest that the death rate of clergy in some parts of the Archdiocese could have been as high as 48%. This is reflected in the Ordination Register, which shows a massive rise in ordained clergy over the period - some being recruited before the arrival of plague in a clerical recruitment drive, but many once plague had arrived, replacing those who had been killed.  In 1346, 111 priests and 337 acolytes were recruited. In 1349, 299 priests and 683 acolytes are named, with 166 priests being ordained in one session alone in February 1350.

The Divorce from Anne of Cleeves: 1540

The Archbishops of York were closely associated with the Tudor monarchy - Thomas Wolsey being Archbishop of York until his arrest at Cawood (one of his official residences as Archbishop) in 1530.

The register of his successor, Edward Lee, contains copies of the official statements relating to Henry VIII’s divorce from his fourth wife, Anne of Cleeves. Henry and Anne were married in January 1540, though the statements in Lee’s register show that this was not a marriage that Henry was particularly enamoured with, stating after their first meeting that “I see no such thing in her, as haith benn shewed me of her and am ashamed that men haith so praesed her as they have dooun, and I like her nott”.

Lee’s register also contains a contemporary copy of the famous final letter from Thomas Cromwell. Henry blamed Cromwell for both organising the union and a lack of success in preventing the marriage itself. With Cromwell’s enemies emboldened by this loss of patronage, he suffered a spectacular fall from grace ending with his execution in July 1540.

In his final letter to Henry, after setting out all of Henry’s objections to the Anne in graphic detail -  ‘I have felt her belly and her brestes, and therby as I can Judge, she shulde be no mayde, which strake me so to the harte whan I felte them that I hadd nother will nor courrage to procede any further in other matters’, Crowmwells signs his letter as ‘with the hevy hert and trembling hande of your hieghnes most hevye and most miserable Prysoner and pore slave Thomas Crumwell most gracious Prince I crye for mercy mercy mercy’