This week we have added two new complete catalogues to Borthcat and made two appearances in the regional and national press.

Our first new addition highlights the Yorkshire branch of a very well known national organisation - the Women’s Institute, or WI as it is commonly known.  For all that it is often viewed as a quintessentially British institution, the WI was actually introduced to Britain from Canada in 1915.  Its original aims were to revitalise rural communities and encourage women to become more involved with food production during the First World War.  However the Institute soon grew in popularity and membership, and the Yorkshire Federation of Women’s Institutes was set up in 1920, part of a National Federation.   At the county level the Yorkshire Federation presided over a range of sub-committees with responsibility for areas such as finance, education, agriculture, home economics, art, handicrafts, music, drama and dancing.  It is the records of these subcommittees that make up a large part of the archive at the Borthwick.

The second new addition is the Records of the Christian Faith Society, an organisation whose property in the small Yorkshire village of Brafferton funded work in pre-revolutionary America and the colonial British West Indies.  The main archive of the Society is deposited at Lambeth Palace, but the Borthwick holds those records relating to the Brafferton estate and the sometimes contentious claims to its income.  The Christian Faith Society was established in 1691 from a charitable bequest made by the natural philosopher Robert Boyle, recognised today as one of the first modern chemists.  Boyle left money in his will to be used for ‘the advancement of the Christian Religion among infidels in Virginia’, in essence to fund the Christianisation of indigenous or Native American peoples living in the then British colony of Virginia.  You can read more about the early history of the Society and their work in Virginia in a Borthwick Blog written in 2015; the house built to house the Native American children, known as The Brafferton, still stands at the College of William and Mary in Virginia.

The American Revolutionary War brought the relationship between Virginia and Brafferton to an end and thereafter the Society focused its money and efforts on the Christianisation and education of enslaved persons in the British West Indies, and then to the ‘advancement’ of Christian religion in the region following the abolition of slavery in 1836.  As times have changed, so too has its mission and today the Society funds the training and religious instruction of clergy and laity in Anglican dioceses in the West Indies and the Indian Ocean. 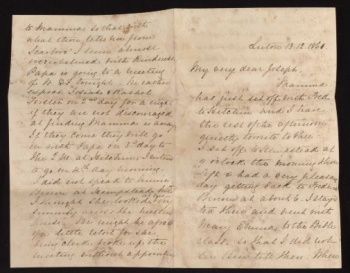 Finally you may have seen us in the press this week - in The Times, the Yorkshire Post, and on the University of York’s own news page.  A collection of 19th century letters now housed at the Borthwick has provided moving new insights into the life of famous York confectioner and philanthropist Joseph Rowntree and the women closest to him; his first wife Julia Seebohm, his mother Sarah, and his sister Hannah.  Joseph suffered a double tragedy early in life, losing his wife Julia after only a year of marriage and their only daughter Lillie just six years later.  Now thanks to the survival of thousands of letters by Joseph, Julia, Sarah, Hannah and their friends and family we can begin to know Joseph, and them, a little better.