It’s the beginning of our fifth month of working from home (the longest most of us have been away from the strongrooms) and the Community of the Resurrection catalogue is coming on apace.

This week we’ve added the papers of one of the Community’s founders Charles Gore and the papers of Fr. Geoffrey Curtis, theologian, poet and friend of T.S. Eliot.  The first of these new additions, Charles Gore, was not an obvious candidate to help found an Anglican religious order.  Born to an aristocratic family and educated at Harrow and Oxford, Gore was politically radical, a supporter of trade unions and Vice President and co-founder of the Christian Social Union (CSU) that promoted social action to remedy contemporary problems of poverty and injustice.  The Community of the Resurrection was however, from its foundation, not intended to be an isolated or reclusive community, but to work to advance the Christian faith at home and abroad and engage directly in social action.  Five of its six founders were members of the CSU and the influence of these beginnings can be seen in the community’s evangelical and educational work and particularly in its opposition to Apartheid in South Africa.

Gore went on to become, in succession, Bishop of Worcester, Birmingham and Oxford, forging an often controversial theological path. He became the leader of a group of high Anglican ‘Christian Socialists’ and in 1917 he licensed 21 women as lay readers, possibly the first in the Church of England.  Although his work had taken him away from the Community he founded, he chose, at his death in 1932, to be buried at Mirfield and is remembered as one of the most influential Anglican theologians of his age.

Geoffrey Curtis joined the Community of the Resurrection three years after Gore’s death.  His experience as Vice Principal of Lichfield Theological College stood him in good stead for the Community’s educational work.  He shared Gore and Frere’s interests in ecumenism, or unity among the world’s Christian churches, serving as Vice President of the International Ecumenical Fellowship and meeting with Pope Pius XII and the future Pope Paul VI.  He also enjoyed a long friendship with the French Roman Catholic priest Fr Paul Couturier who shared his commitment to Christian unity and Curtis went on to publish a biography of Couturier in 1964.

Curtis is also known in the literary world for his long friendship with the poet T.S. Eliot.  An aspiring poet himself, Curtis sent copies of his work to Eliot in the 1930s.  Eliot expressed interest in his work and the two continued to correspond until Eliot’s death in 1965.  Curtis has been described as a ‘spiritual confidante’ of Eliot, as well as a close friend.  Whilst the bulk of Eliot’s letters to Curtis are now held at Harvard University, his papers here at the Borthwick include letters from Eliot’s wife and some of Curtis’ poetry and short stories alongside his theological papers, giving insight into Curtis’ wide ranging interests.

Finally the catalogue of one of our earliest health archives has been added to Borthcat this week.  The York Dispensary was founded in 1788, a year before the start of the French Revolution.  It was a charitable venture set up to complement the work of York County Hospital by treating the poor of the city who were suffering from chronic illnesses and other ailments outside the remit of the hospital.  It was funded by subscription and offered what was essentially an ‘outpatient’ service that could be run more cheaply for its lack of beds.  It was among the early group of pioneering public dispensaries, being the eleventh known to have been founded in England in the 18th century. 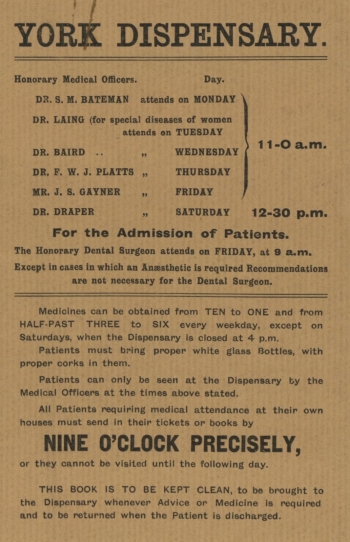 The Dispensary was an immediate success, reflecting the desperate need in York for free healthcare for the poor.  In its first year alone doctors attached to the Dispensary saw 900 patients from their room in the Merchant Adventurers’ Hall on Fossgate.  By the 1880s they were seeing 4,500-5,000 patients a year and had had to move to larger premises on St Andrewgate, then purpose built facilities at New Street, and finally to expand again to Duncombe Place.  By the end of the 19th century it offered, in addition to its usual treatments, a domiciliary maternity service, and in 1908 it opened a small maternity hospital at Ogleforth.

The creation of the National Health Service in 1948 extended healthcare that was free at the point of use to all, making the Dispensary redundant and it closed soon afterwards.  Through the survival of its archive however you can trace the foundation and growth over nearly 200 years of an institution that came to be dubbed, in something of an understatement, ‘one of the most useful charities in the city’.