It has been a bumper week at the Borthwick with seven new complete catalogues added to Borthcat and a new blog delving into the connection between novelist Charles Dickens and our very own York Diocesan Archive.

By far the largest of our new additions is the archive of film, television and theatre writer Charles Wood, who died earlier this year at the age of 87.  The archive forms part of our Samuel Storey writing and performance collection.  Born to actor parents in 1932, Wood studied theatrical design, served in the army for five years, and worked as a journalist before writing his first play in 1959.  His experience of military life had made Wood avowedly anti-war and this was reflected in some of his most famous works which focused on the experiences of the ordinary serving soldier.  His television play ‘Tumbledown’, starring a young Colin Firth, was set during the Falklands conflict of 1982 and won the BAFTA for Single Best Drama and the RTS Television Award for Best Single Play in 1989.  Wood is also well known for scripting ‘Help!’ for The Beatles in 1965 and ‘Iris’, the 2001 biopic of writer Iris Murdoch, played in the film by Dame Judi Dench, who was, incidentally, born in the city of York.  You can read more about Charles Woods’ life and works here.

Second in size and rather different in subject are the Drury Deeds which were loaned to the Borthwick by a Mr Drury in 1957.  They have since acquired the more accurate title of the Deeds of the Barlow Family as they tell the story of the Barlow family of Middlethorpe, near York.  The family purchased the manor and estate of Middlethorpe in 1698, having amassed their wealth from a successful iron works.  The archive mainly chronicles the family’s property and landholdings in Yorkshire, although some marriage settlements and a pedigree provide more information about the family themselves.  Interestingly, a descendent of the Barlows by marriage, Frances ‘Fanny’ Wilkinson, features in another small collection of ours.  Fanny Wilkinson was a pioneering landscape gardener and founder of the Women’s Agricultural and Horticultural Association and we hold five letters written by and to Fanny between 1878 and 1890.

Our next two new additions both have links to the church.  The Hodgson Fowler Collection details the work of a firm of architects who specialised in ecclesiastical architecture.  The firm was founded by Charles Hodgson Fowler, who had trained under the famous Sir George Gilbert Scott, architect to the Dean and Chapter of Durham, but after Fowler’s death it was taken over and continued by William Wood and Edmund Oakley.  The surviving records focus on their work on churches in York and the surrounding area, with the earliest relating to the restoration of York, St Sampsons, in 1875 and the latest relating to a stained glass window for York, St Cuthbert in 1928.  From the fabric of the church to its congregation, the Records of the Church of England Men’s Society, York Diocesan Union, documents the York branch of a national Society set up in 1899 to devote itself to ‘all kinds of work amongst men’. Members could subscribe to a quarterly periodical, the ‘Men’s Magazine’, later called Quest, and attend an annual conference, but membership declined from the 1940s and the society was wound up in 1985.  It is unclear when the York branch was established but the archive follows its activities from 1963 to a final article and letter about the demise of the society in 1987. 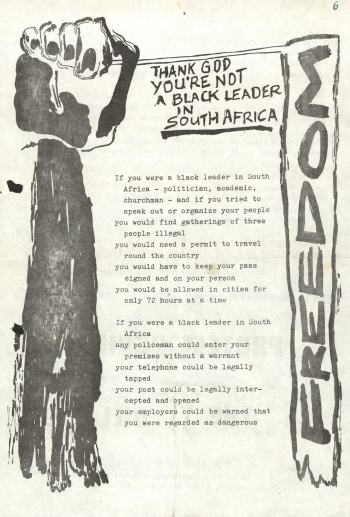 Our final group of new additions came to the Borthwick through the Centre for Southern African Studies (CSAS).  The Centre was set up at the University of York in 1974 to gather collections of manuscript and printed material relating to Southern Africa at a time of enormous social, cultural and political change in the region.  The material includes correspondence, diaries, photographs, administrative records, poetry and prose, and political publications which were donated by politicians, activists, writers, churchmen and administrators.  The Records of the World Council of Churches’ Programme to Combat Racism and the Records of the Anti Apartheid Movement both detail the activities of organisations who worked to oppose white minority rule in Southern Africa and its brutal effects in the late 1960s and 1970s.  Both favoured increasingly direct action, including the funding of African liberation movements and pressure to stop investment in the region, particularly in the arms trade.  Both also remained active into the 1990s, reflecting the very long and difficult struggle for meaningful political change.

A different perspective of colonial-era Southern Africa can be found in the Papers of Marion, Lady Chesham, our final new addition.  She and her husband, Lord Chesham, owned an estate in Iringa, Tanganyika (now Tanzania), and following the death of Lord Chesham in 1952 Lady Chesham remained in the country, becoming increasingly active in community affairs.  By 1955 she had become a spokesperson for the Capricorn Africa Society, a group founded in 1948 to address the constitutional, political and racial problems and which advocated a new electoral system that would be acceptable to black and white alike, albeit on a limited franchise.  Her work with the Society brought her into contact with Julius Nyerere, anti-colonial activist, political theorist, and leader of the Tanganyika African National Union (TANU) and the two became friends.  Nyerere was later Prime Minister of Tanganyika, and its successor state Tanzania.  Lady Chesham went on to become a Tanganyika citizen and to serve on the Tanzanian Legislative Council and National Assembly.  Complementing this archive, the Borthwick also holds the records of the Capricorn Africa Society and the records of author and journalist Judith Hare, Countess of Listowel who wrote ‘The Making of Tanganyika in 1965, examining the development of the TANU, the role of Nyerere, and the country’s journey to independence.

We’ll leave you this week with an excellent weekend read.  Our Archives Trainee John has written another highly enjoyable blog investigating the link between Charles Dickens and the rather questionable management of York’s historic wills in the 1850s.  We’re happy to report that the wills that so concerned Dickens are now safely stored in appropriate archival conditions in the Borthwick strongrooms!