Surface Plasmon Resonance  is used to detect and quantify interations between molecules at a surface. The technique uses a thin film of gold coated onto a glass slide. When polarised light of a specific wavelength is passed through the glass most of it is reflected at the gold layer, but at a certain well defined angle interactions with the free electrons in the metal absorb energy and cause a shadow in the reflection. The precise angle of this shadow is affected by the refractive index of the medium close (<300 nm) to the gold layer. Interactions which cause a change in refractive index in this layer (the "evanescent wave") can then be detected and measured. To exploit this phenomenon for the study of biomolecular interactions, the Biacore system employs a gold layer coated with dextran and enclosed in a flow cell so that samples dissolved in a suitable medium can be passed over the surface. The dextran can be activated by standard affinity chromatography methods and a target molecule ("ligand") attached. Then potential interacting partners ("analytes") may be passed over the surface. Where an analyte binds, the difference in refractive index between it and the buffer it replaces will lead to a signal which is proportional to the mass of material bound - so large analytes give a bigger signal than small ones. The lower limit for detection is about 100 Da.

If the interaction is reversible, then flowing buffer over the chip will remove the analyte, freeing the surface for another experiment. This may be slow, in which case a "regeneration" reagent e.g. high salt or low pH buffer can be used to encourage dissociation. The signals are monitored as a function of time and analysis of the association and dissociation phases can provide information on the kinetics of binding (on and off rates) as well as affinity (dissociation constants).

Material passing over the surface which does not interact will change the refractive index in the surface layer too, but this effect may be compensated using a control flow cell as a reference. This is also helpful in reducing artefacts caused by non-specific binding to the surface, though more elaborate control experiments may be necessary in some cases. The selectivity in detecting specific analyte-ligand interactions means that binding may be detected even using crude or impure analytes.

The area of the flow cell surface is quite small - about 1.2 mm2. The amount of material bound to the surface is in the picogram to nanogram range.

Biacore T200
The T200 from Biacore (now Cytiva) is a research grade instrument for SPR analysis of biomolecular interactions. The system is fully automated with user friendly Wizard based software making it simple to set up experiments which can be run unattended freeing the user for other tasks.

Consumables
The system uses Biacore Chips - cassettes containing the prepared gold surfaces. These have 4 flow cells allowing two completely independent experiments, or three where one cell can be used as a common reference. Various different surfaces are available - CM5 carboxymethyldextran is the cheapest and is used with the amine coupling procedure to immobilise proteins via surface lysine residues. NTA surface chips are used with His-tagged proteins and streptavidin (SA) chips to immobilise biotin labelled materials e.g. nucleic acids. C1 chips have a non-dextran carboxylated surface which may be helpful for proteins that bind carbohydrates, but the binding capacity is lower than CM5.

For typical proteins immobilised as ligands, about 1 ml of material at 10 - 100 µg/ml is required. For the analytes typical injection volumes would be 20 - 100 µL with concentration dependent on the required affinity.

Choice of buffers
The ligand immobilisation step requires the sample in a buffer which will not interfere with the process: e.g. for amine coupling this means a low salt low pH buffer free of Tris and other reactive constituents. Other immobilisation methods may have different constraints.

For the analytes used in the binding association and dissociation phases there is more flexibility: in general the buffer should not compromise activity or stability of the material at the surface. Good matching of the analyte buffer with the background running buffer used is helpful to minimise baseline shifts. This may be achieved by dialysis or dilution.

Regeneration buffers are the most difficult to optimise - they need to abolish interaction so the surface can be fully cleaned of analyte, but without degrading the attached ligand: if these conditions are not met the binding capacity will vary through a series of experiments.

Biacore supply PBS (phosphate buffered saline) and HPS (HEPES buffered saline) buffers at 10x final concentration. Users may prepare their own buffers which should be 0.22 µm filtered and supplemented with 0.05% P20 surfactant. The P20 is intended to prevent protein binding to the pipes and flow channels within the system and its omission may lead to erratic and irreproducible results. P20 is available from GE Biacore.

This equipment was acquired with funding from the Wellcome Trust. 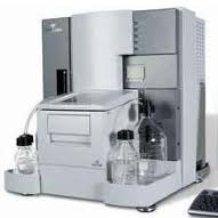