A protein in a suitable solvent is sprayed from a fine electrically charged nozzle, creating droplets from which the solvent evaporates leaving the protein molecules as charged particles. These are introduced into a mass analyser which measures their mass/charge ratio (m/z). As m/z can be measured to high accuracy (1 part in 10000 or better) the mass of  the protein molecules can be determined. The resolution is much better than any other physical technique, allowing tiny changes such as mutation of a single amino acid residue or addition of a modifying group to be detected, where this might be difficult or impossible e.g. by gel electrophoresis or activity measurements.

Electrospray depends on getting the protein (or other macromolecule) from the solution in the droplet into the gas phase.  This occurs at the surface of the drops and depends in part on repulsion between the charges on the molecules. Hence very ionic substances such as salts interfere, as do surface active molecules like detergents. The solvents used are normally a mixture of water with an organic component such as methanol or acetonitrile, often with a small amount of modifier (ammonia or formic acid) to provide the initial charges.

The ideal sample is 20 ul of a 100 uM pure protein solution in pure water. Buffers, salt and other solution constituents should be removed by dialysis or buffer exchange into water - but many proteins do not appreciate this and fall out of solution or stick to the membranes. We have found that samples in 2 - 5 mM Tris are often usable; salt, phosphates, citrates, detergents are troublesome and every effort should be made to remove them. "Good" buffers (HEPES, MOPS etc) are usually bad for mass spectrometry - they swamp out the protein signal with their own. DTT and EDTA in small quantities (1 mM or less) are not usually a problem. The more concentrated you can supply the protein the better, as this allows us to dilute in the analysis solvent and thereby minimise interference from buffer and other components. Some protein impurity is tolerable but complex mixtures are difficult. If you think these sample conditions are unachievable (quantity or quality), come and tell us what you can do and we will try to work out a suitable compromise. When all else fails we have dissolved washed crystals and precipitates directly in acetonitrile-water-formic acid and had usable results! 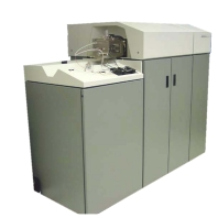