Fluorescence occurs when a sample excited (irradiated) with light of one wavelength gives off light of another, usually longer wavelength. A fluorometer (sometimes fluorimeter) is a spectrometer designed to measure this phenomenon. The first part of the fluorometer is very similar to the spectrophotometer, and consists of a light source and a filter or monochromator to select out a defined group of excitation wavelengths, which are then directed into a sample. The light emitted from the sample is then passed through another filter or monochromator which selects the emission wavelength of interest as well as removing most of the excitation light, before being measured by a detector. There are many variations on this basic plan, depending on the application and the nature of the sample. In the Molecular Interactions Lab we are mainly interested in homogeneous solution samples (for imaging of cells etc. see Fluorescent Microscopes in the Imaging and Cytometry lab). For fluorescence based assays conducted in microwell plates, please see our Plate Reader page.

Fluoromax-4 spectrofluorometer
This instrument is the latest in the high performance Fluoromax series made by Jobin-Yvon and was acquired in 2009 with a grant generously provided by the Departmental Equipment fund and a number of individual contributors. It has a xenon arc lamp light source covering wavelengths ~240 nm - 800 nm with grating monochromators of variable bandwidth for selection of excitation and emission light, and is fitted with fully automatic calcite polarisers for FP (fluorescence polarisation, or anisotropy) experiments. There is a single cell sample holder which can be water-bath thermostatted, and includes a magnetic stirrer (for 10 mm cuvettes). Smaller cuvettes can be accommodated with adapters.

Fluorometer cuvettes are usually square and must have at least two optical faces at right angles - normally all four sides are optically clear. We have 1x1 cm and 5x5 mm quartz cuvettes which require about 2.5 - 3.5 ml and 0.5 ml sample respectively. For measurements above 340 nm (e.g. fluorescein, GFP, SYBR dyes) disposable plastic cuvettes can be used. Beware of some cheaper glass cuvettes which have a self-fluorescence if mistakenly used at UV wavelengths.

The two main problems for fluorescence experiments are unwanted absorptions of either excitation or emitted light, and unexpected fluorescence unrelated to the sample. Unwanted fluorescence usually arises from impurities either in the sample or in buffers. It is good practice to record spectra from the buffer alone to check for this - if there is a problem it may be necessary to use better grade reagents or change buffer. Absorption can be more of a problem. It may arise from buffer, or from one or more sample components. If the excitation light is significantly absorbed, the measured fluorescence will decrease because not all the sample molecules are being excited; obviously if emitted light is absorbed in the sample it cannot reach the detector and again the apparent fluorescence will decrease. These phenomena are sometimes called "inner filter effects". When the absorption arises from an added ligand, it is easy to confuse this effect with a decrease in fluorescence caused by a specific interaction. Although some degree of correction is possible, it is better to check absorbances at the wavelengths involved and keep them below 0.1A.

Although most normal buffer ingredients do not interfere, it is a good idea to check the buffer for fluorescence and absorption at the wavelengths in use. Media and other ill-defined substances can sometimes be a problem. Some fluorescent substances stick to quartz or plastic - cleaning with acid, Decon or ethanol may help. 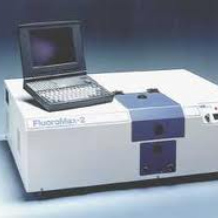