Circular Dichroism Spectrophotometry (CD) measures the interaction of circularly polarised light with molecules. Circularly polarised light comes in left- and right-handed forms, rather like screw threads. These forms interact equally with non-chiral chromophores, but differently when the chromophore has a right- or left-handed form. The result is a small difference in the extinction coefficients for left- and right-polarised light, which varies with wavelength. In proteins, the chiral arrangement of peptide bonds in secondary structures such as α-helix and β-sheet leads to characteristic CD spectra at UV wavelengths. Alteration of the relative orientations, due to conformational or structural variations, causes changes in the CD spectrum. Other molecules such as nucleic acids also have CD spectra at wavelengths where they absorb light.

Jasco J-1500 CD Spectrophotometer
The J-1500 is the latest model from Jasco, who have been making CD spectrometers for many years.  It was installed in Summer 2019.  The light source is a 150w Xenon lamp, which covers the full spectral range (180 - 800 nm).  The optics use a prism monochromator (better than a grating for CD instruments) to disperse the light into different wavelengths.  The circular polarisation is generated in a device called a photoelastic modulator (PEM).  This generates left- and right-circular polarised light alternately by stressing a crystal at high frequency.  After the light passes through the sample it is detected by a photomultiplier tube.  The signal electronics are synchronised to the PEM, allowing the difference in absorption for the left- and right-polarised light to be quantified.  The optical path and sample compartment are continuously swept with nitrogen, as the oxygen in air absorbs short wavelength UV light, which would not only degrade the signal but also create ozone which is toxic and damaging to the mirrors in the optics.  The nitrogen is produced from atmospheric air by a gas generator.

CD cuvettes are made of high-grade quartz for good light transmission. Additionally they may be specially annealed to reduce strains in the quartz which can give rise to background signals. We have three path lengths available - 1 cm (volume required 2.5 - 3.5 ml), 1mm (300 - 400 µl) and a "demountable window" cell comprising two precision made quartz plates which are pushed together in a holder making a cell with a path length of 0.1 mm. This requires only about 50 - 60 µl of sample, but it is difficult to recover after use. The 1 cm cells will accommodate a small stirrer which is useful when doing titrations or temperature ramping. Cuvettes must be kept scrupulously clean for best results - films of protein adsorbed on the sides can cause baseline distortions. It is always a good idea to run a "buffer blank" before measuring a sample (see also Samples and Buffers).

CD signals are measured as a small percentage difference (<0.5%) in absorption for the L- and R-polarised light. As one would expect, the signal increases with sample concentration, but if the sample is too strong, then too little light will reach the detector and the difference signal will be swamped by noise in the electronics. A good guideline is that the sample should have an absorbance (A value) of about 0.9 at the wavelengths you wish to use (not necessarily 280 nm!). The path length of the cuvette must also be accounted for. Typically, in a 1 mm path cuvette, 0.2 mg/ml protein is a good starting point when working in the far-UV (190 - 230 nm), and correspondingly 0.02 mg/ml for 1cm path length, or 2 mg/ml for the 0.1 mm cell.

One of the most important considerations for CD measurements is the buffer composition. At the shortest, and generally most interesting UV wavelengths, many normal buffer components have strong absorptions, which can completely swamp the signal. Some to avoid are: chloride, citrates, certain "Good" buffers e.g. MOPS, DTT and imidazole. A 10 mM sodium or potassium phosphate buffer is often recommended for CD. Tris and TEA are reasonable and can be pH'd with sulphuric or phosphoric acid if the chloride is a problem. Glycerol should not interfere. It is wise to record a spectrum of the buffer alone before starting with samples, to check that its absorbance is not a problem - we have seen unexpectedly high background absorbances arising from contaminated buffers. Sometimes it may not be possible to remove or reduce an interfering component - in this case consider whether a shorter path length could be used with an appropriate increase in sample concentration. 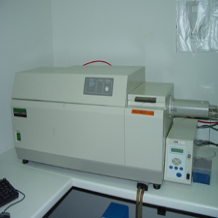