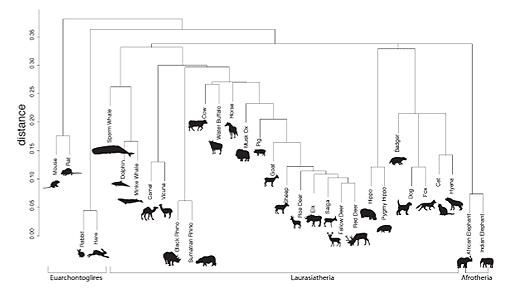 Almost all archaeological bones contain collagen.  A team of BioArCh researchers has been working with York's Centre of Excellence in Mass Spectrometry to develop a method to discriminate unidentifiable bone fragments, using a new technology they call ZooMS.  This work was recently reported in the Journal Rapid Communications in Mass Spectrometry.

This breakthrough could change the way we do archaeology.

ZooMS - short for ZooArchaeology by Mass Spectrometry - uses the persistence and slow evolution of collagen as a molecular barcode to read the identity of bones.  The method uses a well established approach, peptide mass fingerprinting, allied to high throughput Time of Flight Mass Spectrometry. Bones are identified by differences in the mass of the peptides which arise as a result of sequence differences between species.

In Mike's study, working with the Centre of Excellence in Mass Spectrometry he tested the idea that it was possible to discriminate between a wide range of mammalian bone using this approach. He both identified the differences based upon individual peptides that he manually sequenced and (in collaboration with Dr Julie Wilson) by using statistical methods to separate out the samples (see Figure).

From March 2010 Mike becomes a lecturer in the School of Conservation Sciences, at Bournemouth University