Since 2007 landscape investigations funded by the British Academy have been focussed around the ancient city of Stymphalos, 45Km inland from the gulf of Corinth in southern Greece. The site is significant in many ways- and not least as the site where Herakles carried out his legendary sixth labour of killing the Stymphalian birds. The current research follows on extensive excavation and survey of the ancient city begun in 1994  under the direction of the University fo British Columbia.

The lake is a dynamic and complex system: Waxing and waning of its waters has been controlled by a complex series of natural processes as well as technological interventions, including management of the sinkhole on the southern edge of the lake and as early as the 2nd century AD, the lake level was controlled through the construction of and aqueduct which provided lake water to the major city of Corinth 45 km to the NE.

Thus far fieldwork has demonstrated that the lake is undoubtedly the most important source of palaeoecological data in the region, as well as being an important element in the landscape in its own right. Preliminary manual cores at the edge of the lake close to the Classical city revealed cultural material down to over 3m below the present water level. It is possible that these are the remains from earlier phases of the city. The nature of the relationship between the Hellenistic site at Stymphalos and the adjacent lake is a research question of fundamental importance. 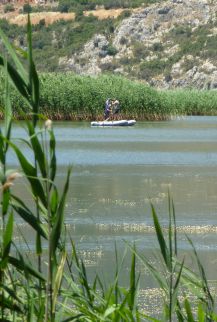