Archiving the Inner City: Race and the Politics of Urban Memory

Archiving the Inner City is a five-year Department of Sociology research project led by Dr Gareth Millington and funded by the Leverhulme Trust. The project examines how, by whom and for what purposes the twentieth century ‘inner city’ is remembered, curated and represented. The project is international in scope and focuses on ‘inner city’ sites in: London (Brixton), Paris (Chateau Rouge/Goutte d'Or) and Philadelphia (the 'Seventh Ward', the site of W.E.B. Du Bois’ famous study The Philadelphia Negro).

In each case, the resonance and influence of place—as historic centres of black urban life—transcends the city and nation and extends to the Black Atlantic. How the urban past is curated is always a contentious process. This is especially true in the case of already politicised spaces such as the ‘inner city’, where urban decline was presented by politicians and the media (and some sociologists) as a ‘race problem’.

The project is concerned with understanding curatorial practices of urban history-making and the opportunities and barriers encountered by practitioners working in related fields. It is interested in understanding aspects of the twentieth century inner city that circulate today in commodity form; in events or occurrences that mainstream history has ignored or attempted to erase from public consciousness but which networks of activists keep ‘alive’; in lesser known histories of resistance, anti-racism and conviviality; in cinematic, literary, musical and other artistic depictions or reconstructions of the inner city; and in attempts to collect accounts and examples of the creativity or everyday life of black urban communities.

This project will not produce an archive itself, nor will it seek to narrate urban history. Rather it seeks to understand the contested ways that the times and spaces of the 'inner city' are made legible today, in cities that are, at the same time, being shaped by political economic processes of gentrification, heritagisation and tourism. 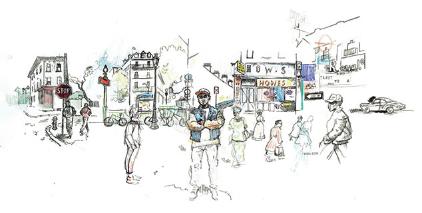