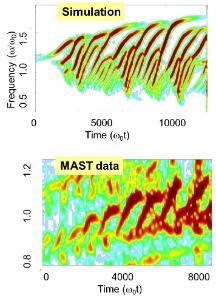 Ions or electrons in a tokamak plasma are typically considered to be “fast” if they’re travelling much faster than the thermal speed. A major source of energetic particles in a fusion device such as ITER is the alpha particle produced from each deuterium-tritium (D-T) fusion reaction. It is important that the energy of the alpha particle is confined within the plasma so that it can be transferred to (cold) fuel ions. Fast particles are also generated from plasma heating systems such as neutral beam injection (NBI) and radio-frequency waves: electron and ion cyclotron resonance heating (ECRH and ICRH) are two examples. The fast particle research at the York Plasma Institute is improving our understanding of several topics including LOCUST, wave-particle resonance and MHD eigensolver.