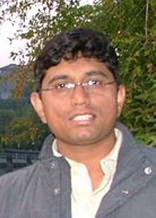 Dr Samadhan Patil is a lecturer in Medical Engineering, School of Physics, Engineering and Technology since January 2020. His research work mainly involves working with the development of biosensors, sensor microsystems, nano-engineered systems and devices for the point-of-care diagnosis, therapeutic monitoring and drug efficacy monitoring.

During his PhD, at Indian Institute of Technology (IIT), Bombay; he worked for the development of the large area opto-electronic devices and thin film materials. Soon after the PhD, he worked for the development of Micro-Electromecahnical Mechanical system (MEMS) based smart chip for an early detection of myocardial infarction at the Micro-electronics group, Department of Electrical Engineering, IIT Bombay.

He received a research fellowship (funded by the Portuguese Science Foundation-FCT) to work at the Institute of Microsystems and Nanotechnologies (INESC-MN), Lisbon. Here he developed processes for the CMOS compatible fabrication of MEMS on glass and plastic substrate. Within the same institute, he successfully led the pioneering efforts in developing the first hybrid device integrating MEMS with the magneto-resistive sensors (spin valve and tunnel junctions) for the detection of ultra-low magnetic field.

Later, he worked at the London Centre for Nanotechnology (LCN), University College London and Department of Materials, Imperial College, London to develop a smart chip based on the nano-mechanical sensors for the rapid diagnosis of infectious (HIV infection) and non-infectious (Haemophilia A) diseases. Before moving to the University of York, he was working as a Research Fellow at the James Watt School of Engineering, University of Glasgow. Here, he co-developed a multi sensor (combining photo-diodes, Ion Sensitive Field effect Transistor and single photon avalanche detectors) personal metabolome device on-a-chip to monitor the panel of multiple metabolites simultaneously. This device was later used for the rapid monitoring of the prostate cancer based on the panel of metabolites and validated against the gold standard techniques used in the NHS laboratory.

He is also a co-founder of two start-up companies Multicorder DX and 3P-Sense.