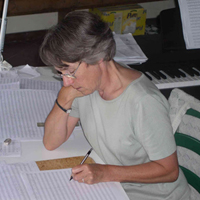 Nicola LeFanu was born in England in 1947, the daughter of Irish parents: her mother was the composer Elizabeth Maconchy. LeFanu studied at the University of Oxford, (St Hilda's College, 1965-8), the Royal College of Music and as a Harkness Fellow at Harvard. She is an Honorary Fellow of St Hilda's College, a Fellow of the Royal College of Music and of Trinity College London, and has Honorary Doctorates from the Universities of Durham and Aberdeen and the Open University. She has composed some sixty works which have been played and broadcast all over the world; her music is published by Novello and Edition Peters. She has been commissioned by the BBC (including the Proms), by festivals in UK and beyond, and by leading orchestras, ensembles and soloists. Many of her works are available on CD; a Naxos CD of her music for strings was issued in 2005.

She is active in many aspects of the musical profession as composer, teacher, director and as a member of numerous public boards. She has composed on a number of occasions for amateurs or young people, notably in her children's opera The Green Children, another collaboration with Crossley-Holland.

Between 1994 and 2008 she was Professor of Music at the University of York; previously she taught at Kings' College London, and, in the 1970s, at Morley College and St Paul's Girls' School.

She has travelled widely in Australia, Europe and the US; her music often draws its inspiration from natural landscape, especially her childhood haunts in Ireland.

LeFanu is married to the composer David Lumsdaine.