Visit John Stringer's profile on the York Research Database to:

Born in Newcastle, John Stringer studied at Huddersfield and York. As a composer, his work has been performed by ensembles such as the Philharmonia and BBC Symphony Orchestras, Basel Soloists, Corrente Ensemble, Black Hair, New Music Players, de ereprijs, Ensemble 10/10, Apollo Saxophone Quartet and 4Mality Percussion Quartet. As a conductor he has conducted contemporary music ensembles such as Black Hair and the New Music Players as well as groups such as the Philharmonia Orchestra. He has worked with Jonathan Harvey, James Wood, Hanna Kulenty, Richard Ayres, Hans Abrahamsen, Stephen Montague, Robert Saxton and Karlheinz Stockhausen amongst others. His recent works include Disquiet for piano which was premiered in Rome (2008) and Nocturnal (2010) which was premiered at Buffalo University by Rohan da Saram, Pascal Gallois and Magnus Andersson. He is published by the University of York Music Press (UYMP). 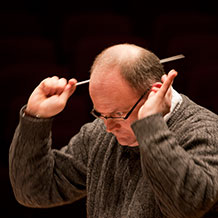