My project shines a public spotlight on the acclaimed, now largely forgotten, British-South African writer Noni Jabavu (1919-2008). As a BBC broadcaster, columnist, editor of literary magazine The New Strand, and author of two highly praised memoirs, Noni lived in and visited scores of countries, speaking of “the peripatetic print” of her feet. She also wrote of belonging to “two worlds with two loyalties; South Africa where I was born and England where I was educated”.

The project brings to life part of York’s little-known black history, while exploring questions of identity and belonging in a life and world on the move. In collaboration with the Borthwick Institute for Archives, The Mount School, biographer Makhosazana Xaba, and scholar Dr Athambile Masola, I uncover Noni Jabavu’s footprint as an international schoolgirl in 1930s’ York, as well as investigating the multiple spheres of her prominent adult life on the go. The project brings together archival excavation, biography, scholarship, and the York civic community to illuminate the life and work of this intriguing figure and questions she provokes us to think about today.

Janet Remmington recently completed a PhD on black South African literary and intellectual history through the lens of travel, and plans a monograph based on her study. She is co-editor of the award-winning volume Sol Plaatje’s Native Life in South Africa: Past and Present (2016) and has published a number of journal articles, book chapters, and reviews on African textual cultures, history, and travel. In addition to her research and writing, she works in academic publishing.

As with most things, the pandemic has added to the challenge. Archival work was delayed and project planning became more complicated, but interest from multiple quarters has opened up a host of conversations and potential outputs.

In December 2020, I submitted an application to the York Festival of Ideas, which happily was accepted at the start of 2021. Since then intensive preparations have been underway for our virtual panel discussion and digital exhibition on Noni Jabavu: Black Briton, South African confirmed for 19 June. I am delighted to be collaborating with South African partners Makhokasazana Xaba and Athambile Masola of the Universities of the Witwatersrand and Pretoria respectively, and with York-based Sarah Moore of The Mount School library and Charles Fonge of the Borthwick Institute for Archives.

In April, as soon as the Borthwick Institute opened with strict Covid protocols, I headed to York to search for Noni Jabavu in school records from the 1930s. With a lot of planning and with a great deal of help from the brilliant Borthwick team, I got stuck in. What can beat uncovering traces of lives in the archives? Come to our Festival session to find out more! I’m liaising closely with fellow panellists to get all in place for June, and also looking beyond to creating a school pack, podcast, blog, and more. It’s around a century since Noni Jabavu’s birth – an opportunity to shine a light on her remarkable life and scintillating writing which deserve to be better known.

I set out in my Jane Moody Scholarship project to bring to life the little-known York footprints of black South African-British writer Noni Jabavu (1919-2008), while exploring the larger mappings of her life on the move and what her multiple identities provoke us to think about today.

My project, inspired by one strand of my PhD research, was driven out of curiosity to know more about Jabavu’s school life in York of the interwar period and, importantly, to open up conversation about British black histories, South African black transnationalism, mobilities, literary development, and global racial justice activism.

My project outputs and contributions have included the following:

Under the general festival theme of ‘Infinite Horizons’, I curated a public-facing panel discussion and digital exhibition centred around Noni Jabavu on 19 June 2021 at the YFoI, bringing together academic, archival, civic, and literary partners from both the UK and South Africa:

The event attracted a diverse audience, including those interested in York-related or Quaker history, alumnae of The Mount School, numerous participants from South Africa keen to engage in discussion about Jabavu’s life and work, and many far and wide interested in literature and history. Just some of the feedback is excerpted below.

Through event interaction, participant feedback, and post-event follow-up, I have uncovered connections to Jabavu’s UK guardians, opened up further conversation via partners with Jabavu’s family in South Africa, and been introduced to new networks, which are in turn informing new lines of Jabavu scholarship. 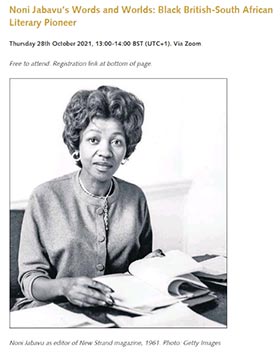 Under the theme of ‘Proud to Be’ for Black History Month UK, I have organized a panel discussion that further explores the work and life of Noni Jabavu, and her relevance today, under the auspices of the White Rose College of the Arts & Humanities (WRoCAH). The event on 28 October is open to all, and again a highly diverse audience is expected from the UK, South Africa, and across the world, reaching a large contingent of students and scholars as well as the interested public.

Investment in archival and digital resources on Noni Jabavu

I feel privileged and proud to have worked on The Mount School archive and the Noni Jabavu papers curated by the Borthwick Institute for Archives at the University of York. Chiefly, I set out to find Noni Jabavu in the archival records of her alma mater, hoping to gain insights into the school context in which she found herself as a black international student, the development of her literary talents, and her views of the world. Locating and contextualizing Jabavu in The Mount School archive had not previously been undertaken to my knowledge, nor public awareness raised about her York years and their influence on her life and work.

A key outcome of my project – with thanks to close collaborator Dr Charles Fonge of the Borthwick Institute – has been the 2021 digitization of key archival items on Jabavu from The Mount School archive, as well as of the materials she herself deposited at York’s Centre for Southern African Studies in the 1970s. I believe the attention drawn to Jabavu through this project – the well-publicized and -attended online events, the YouTube Festival of Ideas recording, and the excavated archival sources now-digitized – will be a great asset to future researchers and members of the public.

I am immensely grateful to the Borthwick Institute for facilitating my archival work during the strictures of the Covid-19 lockdown. One of my archival highlights was discovering a short story ‘The Return’ by Jabavu written in 1937 for The Mount School’s Literary Society magazine, The White Cow. 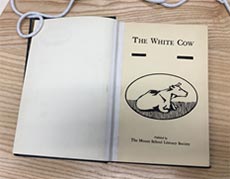 The scholarship, for which I am enormously thankful, enabled me to focus on little-known dimensions of Noni Jabavu’s life and work with special relevance for public engagement in the York context and well beyond. In particular, the project spurred me to invest time and effort in scouring the archives for traces of her school life in 1930s’ York, to deepen connections with scholars in South Africa in researching the area, to collaborate with civic partner The Mount School in surfacing a hidden history of its community, to curate events for non-specialist audiences for mutual benefit, and to lay the foundations for further research.

Overall, the project has demonstrated to me the virtuous circle around research, collaboration, and public engagement in surfacing knowledge, exchanging ideas and insights between communities, enabling new lines of inquiry, enriching partnership and communication skills, and curating resources for use far and wide.

Aspirations for further public engagement work around Noni Jabavu include development of school packs for both UK and South African contexts in collaboration with partners, as well as media write-ups for generalist audiences about Jabavu’s influences and impact. In addition, the project has provided impetus for me to produce outputs of a more academic nature, including a prospective journal article about Jabavu’s formative school years in York.