Rubens and the Human Body

Rubens’ fleshy and voluptuous female nudes and energetic male figures are generally regarded as embodying the 'Baroque', a common, yet controversial term designating the predominant artistic trends and ideas of the seventeenth century. Yet, the Rubensian body has suffered remarkable scholarly neglect and only a limited number of publications on selected aspects are available. This conference aims to address the lack of a systematic and comparative study of the Rubensian nude by bringing together leading scholars for the discussion of recent and novel research into this topic.

Many artistic, cultural, philosophical and even scientific practises and notions converge in the Rubensian nude and some art historical studies in recent years have begun to re-examine certain works in light of neo-stoical, scientific and medical concepts. Moreover, a great number of Rubens’ paintings underwent (or are currently undergoing) a major restoration programme which has brought important information to light on working and studio practises. The conference therefore aims to rethink the Rubensian nude by contesting and revising scholarly assumptions through a comprehensive and interdisciplinary engagement with Rubens’ painted bodies. Speakers not only include art historians, but also literary historians, conservators, and historians of early modern science. It is hoped that the diversity of approaches, methods and perspectives and the different understandings of the Rubensian nude they produce, will also lead to reflections on these painted bodies as historical reality or cultural text.

The Rubensian nude is here understood as visual representations of the nude, male or female human body attributed to Rubens himself or a member of his workshop. While, for the sake of brevity, the conceptual framework of this conference will use the term ‘Rubensian nude/body’ as an explanatory category, it is also a stated aim of this event to question the potentials and limitations of this concept. Did contemporary audiences recognise the sensuously painted ‘Rubensian body’ as a particular, if not peculiar, artistic repertoire? If yes, how did seventeenth-century viewers verbalise the visual quality of the ‘Rubensian nude’? How can we best understand seventeenth-century practises of reading and viewing the Rubensian body? It is hoped that these investigative questions will also lead to a more detailed evaluation about the paradigmatic status of the Rubensian, painted body and whether we are justified in stressing its singularity within seventeenth-century Flemish and the broader early modern European visual culture.

The conference is divided into two distinct, yet closely interrelated sections. Sections I to IV are dedicated to the invention and creation which generated and defined the Rubensian body. Workshop practises drew on a great variety of artistic and anatomical sources from media as diverse as drawings, prints, sculpture and painting thus forging complex relationships between designers, artists, printers etc. To what extent and how do Rubensian representations of the human body denote forms and practises from these media and vice versa? What painterly techniques are involved in producing the fleshiness and amplitude of the Rubensian bodies? How do these agents and processes impact on the specific visual and intellectual characteristics (such as notions of gender[ing], artistic identity etc) of the Rubensian body? Sections V to VIII on the following day will then further the discussion by investigating how these production practises informed the meaning of the Rubensian nude. Discussions will be focused on the way in which the pictorial strategies in the form of specific figurations or painterly effects generate or even undermine the interpretation thus transforming the image into a contested field of force. Papers will not only focus on individual image categories such as allegorical, mythological paintings, and, as a sub-category, the ‘Bacchic’ bodies, but will also question to what extent contemporary philosophical and recent scientific discoveries influenced the Rubensian nude. The discussion will therefore be based on evidence as wide-ranging as political, dietary, scientific and philosophical tractates and texts which circulated in Rubens’ social network or are known to have been in his library.

All papers are intended for publication as part of a collection of essays. Deadline for the submission of all manuscripts is 30 September 2011. Publication details will be available as soon as the conference programme has been finalised.

Rubens and the Human Body

SECTION I: THE MAKING OF THE RUBENSIAN NUDE: WORKSHOP PRACTISES

Andrew Cunningham (History of Philosophy and Science Department, University of Cambridge)
Anatomist and Artist in the Time of Rubens (PDF

, 289kb) and Shield of Medusa: Themes of Ocular Anatomy and Self-relfexicity in Ruben's Judgement of Paris 1636

SECTION II: THE MEANING OF THE RUBENSIAN NUDE: THE LANGUAGE OF THE BODY

Please contact the administrative assistant for this conference Ms Jasmine Allen for any queries at ja509@york.ac.uk 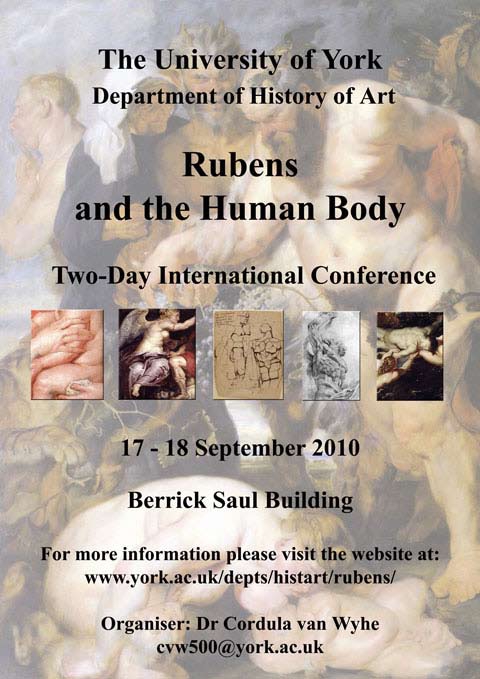