The stone churches and carved monuments of Anglo-Saxon England are perhaps the most perceptible, widespread, and easily accessible works of art from this period of English culture.In the churches, often enveloped in later modifications, it is possible to disentangle the former early structures, and to identify the sources of architectural ideas that often lie in structures as far afield as Rome and Jerusalem. Together with the carved monuments (such as those at Ruthwell in Dumfriesshire and Masham in North Yorkshire), produced during the 8th and 9th centuries, they reflect the institutional concerns of their patrons, while at the same time raising questions concerning their perceived audiences. The later, Viking-age, sculptures, on the other hand, betray a complex interaction of Christian narrative with Scandinavian military taste and heroic mythology.

This module will focus on these structures as a means of exploring the arts of the stone builders and carvers of this early medieval period, and the complexities surrounding the production, decoration, and the roles of the patrons and audiences of these most public of early medieval arts.

By the end of the module students should have acquired the following: 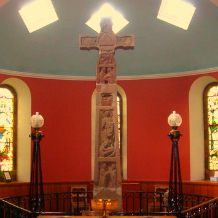