A former PhD student at the Department of Health Sciences has written a book about Life After Encephalitis. 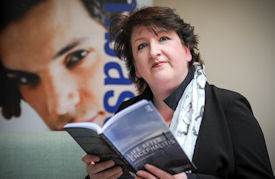 Ava Easton, who was a PhD student at the department from 2005–2014, and is now Chief Executive of The Encephalitis Society, collated survivor and family member stories into the book.

Dr Easton has been the Chief Executive of The Encephalitis Society since 2011. She is a Health Scientist and researcher and considered a world expert in the consequences of the condition, an inflammation of the brain.

She often accepts invitations to speak at conferences around the globe, and was awarded an Honorary Fellowship from the University of Liverpool, thanks to her extensive collaborative work on the research and study of Encephalitis with the Liverpool Institute of Infection and Global Health. She also works extensively with The University of Oxford and Public Health England.

Life After Encephalitis provides a unique insight into the experiences of those affected by encephalitis by sharing the rich, understanding, and often powerful, narratives of survivors and family members.

Ava interviewed many people affected by encephalitis for the book which features several nightmarish accounts of changed personalities, increased violence, and even attempted suicide, alongside tales of hope, love and of lives renewed.

She said: “I wanted to give a voice to survivors of encephalitis and provide an insight into the experiences of those affected – be they survivors, family members or those left bereaved. Their stories are heartfelt, at times distressing to witness, but also full of hope and inspiration.”

She went on: “A lot of my work at the University of York planted the seeds for what would eventually become Life After Encephalitis. I have to credit the guidance of my supervisor, Professor Karl Atkin, Head of the Department of Health Sciences, who challenged me and approached the subject from a different point of view.”

Her PhD covered the role of narratives in recovery following encephalitis.

Prof Atkin said: “I’m delighted one of my former students has published such an interesting book on the affects of encephalitis on all those who come into contact with the condition.”

For details of how to purchase the book, please visit www.encephalitis.info/LifeAfterEncephalitis