E-cigarettes and the future of the tobacco industry 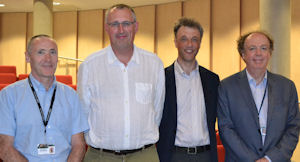 In 2013 the investment bank Goldman Sachs identified e-cigarettes as a technology capable of “creative destruction,” offering smokers an alternative product that could require cigarette manufacturers to radically adapt their business models or else face terminal decline.

Alongside debates about the comparative safety of e-cigarettes, understanding the strategic significance of such new products to the tobacco industry is of critical importance to the future of tobacco control and public health policy more broadly.

Professor Collin's talk entitled 'E-cigarettes and the future of the tobacco industry: Competition or capture, obsolescence or renewal?' examined how tobacco companies have sought to respond to such threats, and highlighted the opportunities associated with e-cigarettes and the harm reduction agenda. It appraised key acquisitions and initiatives and examined their roles within wider industry efforts to undermine tobacco control, including promoting alliances with parts of the public health community, exploiting subsequent divisions, and advancing the core strategic objectives of rehabilitation from pariah status and increased engagement in policymaking.

Professor Karl Atkin, Head of Department for Health Sciences, said: "I was delighted that Jeff's talk provided a lively debate around the subject of E-cigarettes for members of the public, university staff and students."