Ian was Head of the Department of Education at the University of York from 1974 to 1995, which was a time of steady and innovative growth for the department, which is still going on.

The black and white photo of Ian shown here appeared on the set of staff photos displayed outside the departmental office in 1979.

After graduating from Cambridge with a degree in History, he became part of a naval unit in Scotland which monitored Russian aircraft movements. He often remarked that Russian pilots swore a lot, which is why he knew so many swear words in Russian.

Ian then taught History and Russian at Haberdashers’ Aske’s School, Elstree and St Paul’s School London. After this, he joined the British Council based in Vienna, and lectured at the Universities of Vienna and Salzburg before joining the University of York as a Lecturer in Education in 1967.

Ian was an international expert on educational reform, and had a particular interest in political education. This made for a departmental climate within which we welcomed a steady stream of high profile international visitors and outside speakers. His report “Teaching and Learning about Human Rights” for the Council of Europe in 1984 was highly influential in shaping good practice in this area. 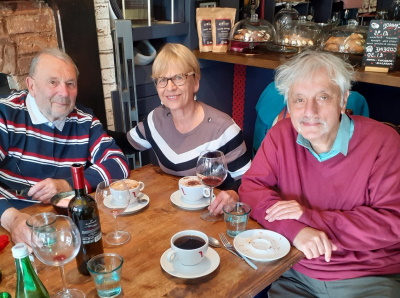 Ian thrived in warmly looking after our many overseas students, and regularly arranged Sunday outings for them by coach (free of charge) to attractions in the region, where the venue was kept secret until the coach arrived at its destination. Many former students have kept in touch with Ian, and thanked him for the kindness he showed to them whilst they studied at York. During his retirement he regularly communicated with a truly global network of friends, as far afield as Australia, Canada and Taiwan.

Ian was recently diagnosed with cancer in his lung and liver, against which there was no effective treatment. He leaves behind his son, Mark, and his two grandchildren, Oskar and Konrad (who are both currently at university). His wife Karen and his daughter Kristin pre-deceased him. A few years ago an Italian coffee shop opened up in his village (Wheldrake) and my wife Christine and I had lunch or an evening meal with Ian there on several occasions. This photo (above) was taken last October. The coffee shop was not licensed to sell alcohol but people coming for a meal were allowed to bring their own bottle of wine, which Ian always did!