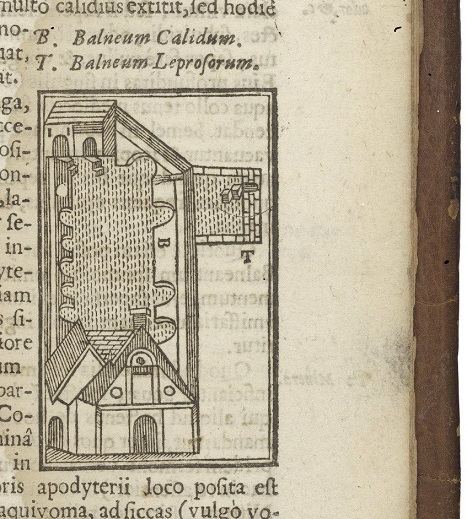 The Zoom recording is available to watch until the 18th March.

In Holinshed’s famous sixteenth-century Chronicles, arguably the first compendium of the British Isles, Holinshed described spas as open to a heterogeneous group of people, where people of “all degrees,” could claim right to the health benefits thought to be engendered in mineral spring waters. Two hundred years later, Holinshed’s theory was put to a certain kind of test: on the island of Nevis, a black man decided to soak in a mineral spring outside of Charlestown, the capitol of the British colony. He bathed until he was interrupted by a white Anglican minister, who questioned him about the spring, its uses, and its qualities. There is much about this bathing man that we do not know: his name or family, where he lived, whether he was free or enslaved. This glimpse into the man’s life survives only because it was recorded by that intrusive minister – who gathered and interpreted the man’s account within a tradition of appropriating the knowledge-systems of people of color, particularly in relation to the British state’s efforts to understand more about medicine and the natural world – and later used the anecdote in a book which promoted imperial efforts to colonize Caribbean space. Holinshed’s political discourse and its subsequent practice, in the lived experience of the black man who bathed in the Nevisian spring, both fit within an important, if currently underexplored, seventeenth- and eighteenth-century British Atlantic phenomenon: the use of mineral waters as a medical cure. When early modern people became ill or injured, often their first recourse was to visit the spa in order to seek a cure. Spas were established in the British metropole and in the sites it claimed as colonies, where the women and men who took the waters often mixed them with flora and fauna from around the Atlantic – from molasses to veal broth – in order to affect a cure. This paper will refigure and reclaim the urban spa, demonstrating how study of these sites helps us to better understand British interactions between medicine, subjects, and the state; the relationship between food, drink, and the health of the body; and the impact of these processes on conquest, colonization, and imperial formation.

Amanda E. Herbert is Associate Director at the Folger Institute of the Folger Shakespeare Library, where she runs the Fellowships Program. She holds the M.A. and Ph.D. degrees in History from the Johns Hopkins University, where she worked under the direction of Prof. John Marshall, and completed her B.A. with Distinction in History and Germanics at the University of Washington, where she worked with Prof. F.J. Levy. She studies the history of the body: gender and sexuality; health and wellness; food, drink, and appetite. Her first book, Female Alliances: Gender, Identity, and Friendship in Early Modern Britain, was published by Yale University Press in 2014, and won the Best Book Award from the Society for the Study of Early Modern Women. She has published articles in Gender & History, the Journal of Social History, and Early American Studies, and her fellowships include grants from the American Antiquarian Society, the Huntington Library, and the Yale Center for British Art. She is an editor for The Recipes Project, a Digital Humanities effort based out of the Max Planck Institute in Berlin, and a co-director for Before Farm to Table: Early Modern Foodways and Cultures, a $1.5 million Mellon Foundation initiative in collaborative research at the Folger Institute; as part of this project she is co-curating an exhibit at the Folger in 2019, "First Chefs: Fame and Foodways from Britain to the Americas." She is at work on her second book project, Water Works: Faith, Public Health, and Medicine in the British Atlantic, which seeks to refigure and reclaim the early modern spa, not just as a place of elite sociability, but as an important site for the study of the history of public health.