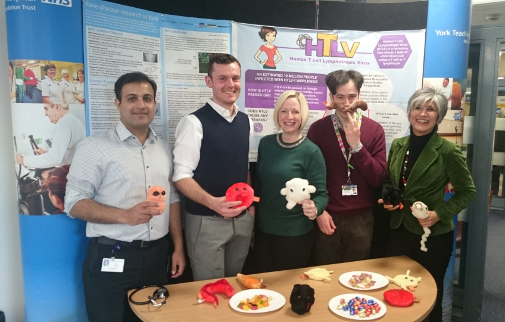 For the third year running C2D2 has supported Rare Disease Day by contributing to an outreach stall at York Hospital where examples of research undertaken by York academics in the area of rare diseases were showcased. Some of this research is funded by or has received funding in the past from C2D2, including the study of a new and inexpensive test for treating the rare group of genetic blood disorders, congenital disorders of glycosylation, and explorations into the pathogenesis of the autistic spectrum disorder, Rett syndrome, with a view to developing new therapeutics.

The stall attracted a lot of interest from members of the public (some of whom were hoping to see their own rare disorder feature on the posters) and hospital staff. The organisers Dr Fabiola Martin and Dr Dani Ungar were on hand together with other medical and academic colleagues from the Hull York Medical Scholl, the Centre for Immunology and Infection and the Department of Biology to talk to the public. A conversation with one member of the public resulted in that individual deciding she would like to volunteer in a study to find out more about the rare condition she has.

A patient respresentative was also present to answer questions specifically about one of the rare diseases being showcased, human T-cell lymphotropic virus (HTLV) which is a human retrovirus which can be transmitted in similar ways to the related and more familiar HIV virus. Although the great majority of people infected with HTLV-1 do not develop any medical problems, these can be severe and include extreme movement difficulties in the lower body and inflammation of muscles, joints and other tissues.